Image gallery - not bad, but not great either

The gallery of Nokia N97 is yet another part of its interface that hasn't been dramatically changed compared to non-touch Symbian predecessors. It has neither the swanky 3D view mode, nor the customizable slideshow we are used to seeing in the Nseries. The only difference here is the added touch-friendliness. In fact, the gallery is one of the very few places around the interface where sweep gestures are allowed.

This means that you can go through your pictures (and videos as well) by sweeping your finger across the screen. Unfortunately, there isn't kinetic scrolling, which is to be seen in the web browser for instance, and in many of the N97 rivals.

Opting between portrait and landscape mode is automatic, thanks to the built-in accelerometer. Unless you have that feature disabled, all you need to do to switch modes is to flip the phone sideways (or just to slide out the QWERTY keyboard).

Image zoom is controlled via either the volume rocker or an on-screen touch slider. In all other cases, images are displayed full screen. After you've cheked the details, to go to the next photo you always have to zoom all the way back, which might get annoying if you zoom in to often.

Overall, picture browsing is relatively fast, but the zooming is rather slow. It takes about a second on each zoom step even when dealing with 5 megapixel photos, let alone higher-res ones. The panning is worse than HTC's latest models and many of the other similar devices - it's almost jerky.

The music player (identical to the 5800 XpressMusic one) is very similar to the S60 3rd edition versions. A few cosmetic changes here and there and touch-optimization is all that sets it apart.

Not that the music player isn't capable enough or something - it surely has more than enough functionality. However some more eye-candy would have been quite welcome. After all, touch interfaces are usually mostly about being fun to use and nice to look at.

Your music library is automatically sorted by artist, album, genre and composer and searching tracks by gradual typing is available. You can also create your own playlists in no time.

The process of adding tracks to the library is as simple as choosing the refresh option. You won't need to do that if you upload the music via the proprietary PC Suite application.

With the huge number of supported formats you will hardly ever come across an audio file that the phone won't handle. Album art is also supported and if you don't like the default sound of the device you can enhance it by applying one of the five equalizer presets and if they seem insufficient you can create new ones in a matter of seconds.

Quite naturally, the player can also be minimized to play in background. In this case a tab appears on the stand-by screen indicating the currently running track.

The audio quality of Nokia N97 is just great, save for the disturbingly high intermodulation distortion levels. The handset fared excellently in all other parts of our test achieving some pretty impressive scores.

The frequency response has been greatly improved over what the N96 could deliver. It now closes on perfection, deviating by no more than 0.27dB throughout the audible range. 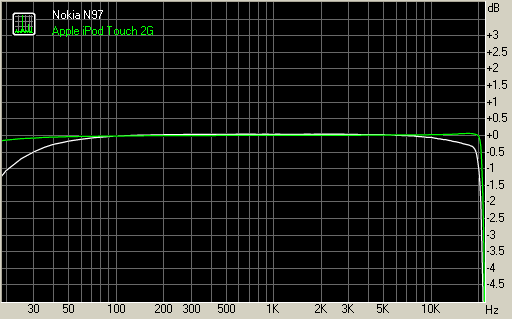 Video player could be better

Watching a video on the Nokia N97 is generally a pleasure due to the large screen. The built-in video player has decent functionality but only supports a very limited number of codecs, no DivX and XviD out of the box. As to third party solutions, mixed success is reported in terms of getting compatible players to run on the 5800 XpressMusic or the N97.

The Nokia PC suite has a built-in application that automatically converts all kinds of video files to the format and resolution your phone supports. The automatic converter though seems to compress the videos too much even at the highest quality setting and they look over pixilated but so far it's the easiest way of getting video to your Nokia touch handset.

The video player itself only works in fullscreen landscape mode but, since anything else would have made the widescreen display useless, this is understandable. When in fullscreen, a press on the screen shows the controls which are normally hidden.

The amply sized high-res screen is also more than welcome for truly enjoying your clips. With QWERTY keyboard slid out, the Nokia N97 looks just like made for video watching.

Nokia have called their video app (which is actually a Real player in disguise) Video & TV but as it turns out, the TV is actually videos that you can stream from Nokia or Reuters. One can only wonder how YouTube was left out of this streaming video equation.

The FM radio on Nokia N97 has a neat and simple interface and can automatically scan and save the available stations in your area. It also has RDS support and automatic scanning for an alternative frequency. This means that if you travel the N97 will take care of auto-switching to the frequencies of your selected radio station.

The FM radio interface is quite cool

The RDS is the best part of Nokia N97 FM radio. The radio station name gets displayed with cool effects across the whole screen, while the rest of the RDS readings are printed in nicely legible text on a line at the bottom. Perhaps we would have preferred this font a bit larger, but it doesn't really matter that much.

The inbuilt FM transmitter is quite a useful feature, which allows you to sream the music on your phone to any standard FM radio receiver nearby at a frequency of your choice.

If you live in a city with lots of radio stations, it would be hard to find a free frequency slot within the standard FM scale of 88.10 to 107.90 MHz. Even if you manage to find one, you may experience poor sound quality and/or interferences. That is what happened to us while testing the N97.

Still, we managed to make the music sound really loud and crisp by placing the phone closer to the antenna or the back of the radio head unit itself. The interface of the FM transmitter app is simple enough to guarantee smooth and easy operation.