The camera is a mixed bag

Nokia N97 has a 5 MP camera with a maximum image resolution of 2592x1944 pixels. Carl Zeiss optics and the dual-LED flash promise nice photos with a lot of detail. Let's see is it true.

The camera UI is similar to the one found in 5800 XpressMusic - the few changes made are hardly for the better. All the settings are squeezed in a common menu, except for the flash, which has its own dedicated shortcut. We understand that a tabular layout isn't the easiest of thing this kind of devices but some of the more important features could have had their own shortcuts too.

At least the range of settings that the Nokia N97 offers is extensive enough: from manual white balance and ISO to exposure compensation, sharpness and contrast. Various effects are also at hand, labeled as Color Tones.

Unlike the Nokia 5800 XpressMusic, which needed a firmware update for the purpose ,in N97 camera geo-tagging is present out of the box.

Nokia N97 lacks all the modern features that the other competing manufacturers are using such as face detection, smile detection and even blink prevention - not to mention in-camera face retouching or the likes. So yes, Nokia seems quite conservative in equipping their cameras lately but we really hope that the N86 8MP is going to change that.

The Nokia N97 viewfinder doesn't occupy the whole screen - a bar on the right is reserved for the touch controls. You have a settings button that launches a semi-transparent overlay of all available shooting options, a dedicated Flash button and an on-screen shutter key. Again, that last one is absolutely redundant - it doesn't have a half press/full press action to properly handle auto focus. It would've been way better to have a Quick Settings button instead.

The picture quality is pretty decent in our books. First of all the picture detail is enough to qualify the photo as a very nice one. The next thing is the noise reduction algorithm is mature enough and finds a good balance between noise levels and detail. There is no purple fringing and the white balance and auto ISO settings worked just fine.

If there is one thing to complain about in the Nokia N97 photos, it would be the color balance. Most of the photos compared to the LG Arena's have generally warmer colors and the yellow tint is at times too much to swallow. Bear in mind though that quite a lot point and shoot cameras are tuned to reproduce colors warmer than they really are since this makes the photos look more vibrant and appealing to the end-users,

The dynamic range is also not quite impressive with highlight clipping a bit more frequent than usual.

We've prepared an impromptu shootout between the Nokia N97 and the LG Arena. It's not that the LG Arena is the best there is, but it's a nice performer and… well, we had that readily available.

And there go some more photo samples from the N97 camera.

Starting from this review we will be publishing test shots of the ISO12233 resolution chart. This is a standard chart used for evaluating the synthetic resolution of digital cameras. It is an excellent tool for measuring pure horizontal and vertical resolution and also offers a good reference point for comparison of resolution between cameras. The chart will be available for every cameraphone which comes through our office from now on to facilitate monitoring the progress that the manufacturers are making in terms of resolution.

We have also added a few touches of our own to the chart by sticking a color chart and a grey scale over it. The first one will allow you to see the amount of noise in the different colors as it tends to vary quite a lot from phone to phone depending on the sensor and the noise reduction technique applied.

The gray scale is there to provoke the usually more powerful noise reduction, which kicks in when shadows are involved. Once that happens, you will notice complete loss of detail towards the darker end of the scale. Meanwhile the thin lines at the top of both the color chart and the gray scale show more real-life effect of the noise reduction. You will notice that the numbers are barely readable with some phones and more easily visible with others.

For starters we have compared the Nokia N97 to the good old Nokia N95 8GB. The once famous for its camera dual-slider is now easily outclassed by the N97, which has better performance in every aspect. Both the horizontal and the vertical resolution are superior in the touchscreen handset with the noise levels remaining lower. 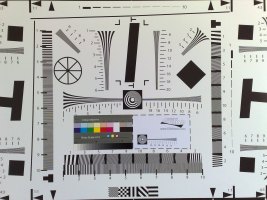 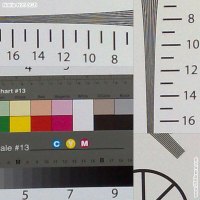 Camcorder: VGA is no longer fashionable

The camcorder interface doesn't differ from the still camera much.

The N97 video capture quality is OK. Colors and white balance turn out just fine, but the compression seems too aggressive in most of the clips and produces many noticeable video artifacts. Plus the other manufacturers are already offering better video quality at higher resolution - take Samsung, for instance, and their Samsung S8300 UltraTOUCH or even Omnia HD. Not to mention the 120fps and slow-motion videos that are already standard issue stuff on the higher segment LG and Samsung phones.

Here are two samples from the Nokia N97 taken at VGA@30gps.

So in essence, Nokia N97 offers a three-year old camera technology remixed as a brand fresh product for quite a steep price tag. Image quality is still top-of-the-line but for a 5 megapixel cameraphone. Five megapixels don't count as high-end anymore, not to mention the lack of all the current popular features such as face detection, tracking or manual focus, touch focus, smile shutter, blink detection and the likes. Video recording is another area where Nokia have made no progress for the past several years. So if you've set your eyes on N97, we really hope that the camera is not the most important feature for you as Omnia HD goes for pretty much the same asking price.