While earlier rumors of the still unannounced Nokia N9 predicted that Nokia's next Symbian^3-based device will come with a 3.5-inch touchscreen now it turned out that the phone will actually feature a way larger 4" display. And there's a photo evidence to prove that! 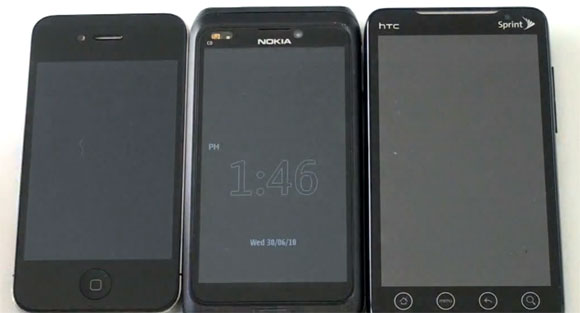 As the following video reveals, the Nokia N9 (or whatever the prototype's name turns out to be in the end) multi-touch capacitive screen is considerably larger than iPhone's 3.5-incher and only a tad smaller than HTC Evo 4G 4-inch display. So, the upcoming QWERTY-enabled N9 will be the first Nokia phone to sport such a big screen.

There are no news concerning the display resolution, though - it's said to be nHD (360 x 640 pixels) which seems rather low for a 4-inch screen.

As for the rest of the rumored features, those remain unchanged as well - the Nokia N9 should pack an 8MP shooter with dual LED flash, 3G, Wi-Fi and Bluetooth support and an HDMI port. Once again, there is no information on the launch date and price tag of the highly rumored smartphone.

I bought a nokia N9 in may,2012...İts a real disappointment for me...Its just a phone..nothing more. You can just answer your callings or you call someone..and u can read or answer your emails.. thats all..nothing more.. it says 8MP camera but ...

8MP camera? That would totally suck! Then why would I buy it instead of N8? What does it offer in PLUS (additional) to my N8? Why should I replace my N8 with N9 if its camera is worse and not better? Bring on a 12MP camera with a CCD sensor instead...