Nokia X, X+ and XL all went official yesterday and Nokia is already trying to attract developers to its latest platform. The trio is running on a stripped-down version of Android 4.1 Jelly Bean missing on all Google Services. 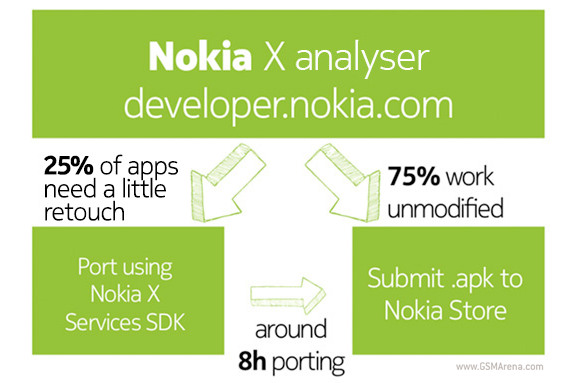 Nokia has modified the entire user interface to mimic Asha's Fastlane plus it has created a proprietary application store. There is also a dedicated SDK and porting tools, which basically will make all incompatible Android apps compatible for the platform. Those apps requiring Google Services or linking to such, will be redirected to their Nokia/Microsoft analogues.

So, now that all documentation and tools are out, Nokia wants developers to submit their apk files to the Nokia Store. Nokia claims a good 75% of all Android apps currently available require no modification, while the rest should undergo a little retouch. The porting process should not take more than 8 hours though, according to Nokia.

There is even a tool, which will determine if your app is compatible with Nokia X or not, so you don't have to worry about doing all the test process by yourself.

You can find everything you need to test and port your Android app to Nokia X right here.

hi microsoft(nokia) I am using nokia x and its good,smooth touch,but what is not good about this devise is the internet signal is not totally as better as samsung nor other device. I hope when you launch a new nokia brand its more upgrade than the ot...