Nokia Wahoo spotted, GPS and half QWERTY on board

After the promising leak of the Nokia smartphone roadmap, we have more hot news for you, this time with photos. Codenamed Wahoo, the new Nokia flip phone stands out with its half QWERTY keypad and built-in aGPS. The new Symbian smartphone looks similar to the BlackBerry Pearl Flip in terms of design and will be released exclusively for AT&T in US. 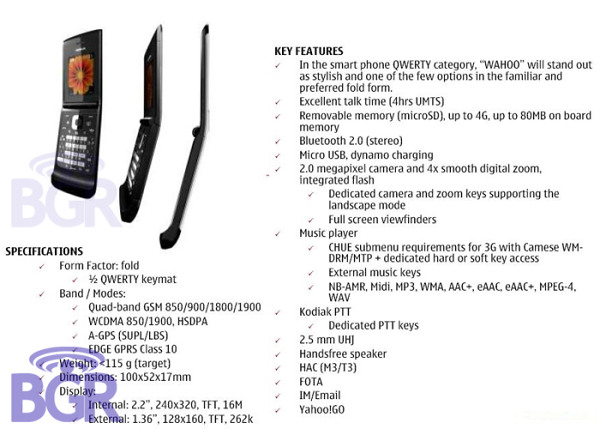 The quad-band Nokia Wahoo will support dual-band HSDPA, 2 MP camera with flash, Bluetooth v2.0 with A2DP, 80 MB user memory and microSD card slot. Quite naturally for a flip phone, it will have two displays – an internal 16M QVGA 2.2″ TFT display and an external 256K TFT 1.36″ with a 128×160 resolution.

The Wahoo flip is not among the slimmest flip phones, as its dimensions are 100 x 52 x 17 mm and 115 grams weight. There is no information on the phone pricing or availability.

However judging on the full Nokia smartphone roadmap, that we reported recently, the Nokia Wahoo may just as well be already canceled.

We didn't include canceled phones in the table for conciseness and one of those that were left out is a handset described as "Version of 6650 with half-QWERTY keyboard added". This canceled handset is codenamed as Roxy in the table, so in the end of the day, we don't have a definitive answer to this rumor. But then again - unconfirmed information is what rumors are all about.

this phone will be my moto razr v3i and nokia e61i combine. cool...

dont like it, half blackberry/half moto razr kinda car crash victim but eugh... just not nice!