At first we couldn’t believe it either. But after a while we realized that the old-school S40 video player has been upgraded with Xvid support. And the best part is it managed to play every Xvid video we threw at it (granted, files have to be up to 700MB and of up to nHD resolution). It’s not the best in the class, but it’s way better than we had hoped for.

As far as the user interface is concerned there are shortcuts for fullscreen mode, fast-forward or rewind and that’s that.

Despite the X label, Nokia X3-02 didn't manage to impress us with its audio output quality. The volume is pretty loud, but we've seen far cleaner outputs from Nokia handsets.

Don't get us wrong - things aren't too bad and if you aren't much of an audiophile you probably won't be too bothered by the sub-par noise levels, dynamic range or stereo crosstalk.

At least things don't get much worse when you plug in a set of headphones, with the intermodulation distortion and stereo crosstalk the only reading to take a (soft) hit.

Here go the results so you can compare it to some of the other handsets we have tested so far. 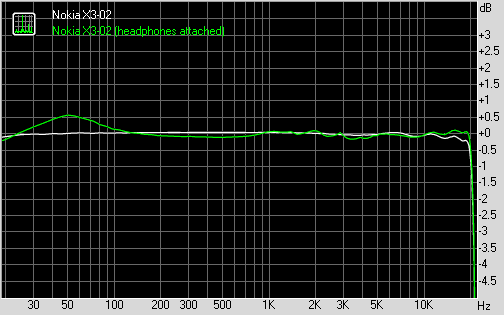 Another fixed-focus 5MP camera. Only Nokia knows why

The Nokia X3-02 has a 5 megapixel camera– but there’s no autofocus. The maximum image resolution is 2592x1944 pixels.

Typical Series 40, the camera settings are rather limited. The available options include portrait mode, white balance, various effects and a self timer.

While impressive as a number, the 5 megapixels of the Nokia X3-02 camera fail to impress. The produced images are the same quality as the X2 ones – lot’s of noise and way too heavy compression. These two combined seem to bring down the practical resolution of the X3-02 camera to way below 5MP. There’s also obvious oversharpening and even some purple fringing too.

We also snapped our resolution chart with the Nokia X3-02. Yep, we meet the pink spot in the center of the frame once again. You can check out what that test is all about here. 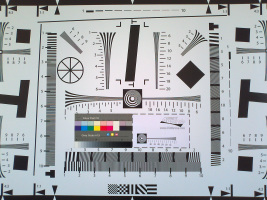 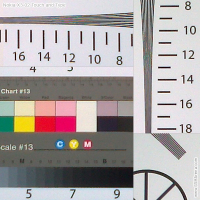 Things don’t get any better with video recording. The X3-02 manages VGA resolution at 15 fps, but better video recording uses a lot more processing power than the X3-02 can’t afford.

The result is the same as the still images – low contrast, lack of detail, heavy compression, lots of over sharpening and purple fringing. Some of the videos can be enjoyed we guess but only on the phone’s display.