Nokia X7-00 caught on camera again, is headed for a preview

The Nokia X7-00 makes another appearance (with an AT&T badge this time). It's still not officially announced by Nokia but that won't stop the X7 getting an early preview. And those four speakers might turn out to be a sham.

So, someone got their hands on a Nokia X7-00 (codenamed Sushi) and posted a few new photos online. The AT&T logo on the phone means that it will launch in the US but rumor has it that it's going to be available in Europe as well. 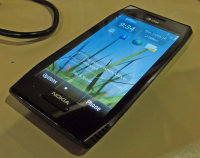 Anyway, Eldar Murtazin of Mobile-Review.com (who isn't exactly on the best of terms with Nokia) said he's busy writing a preview of the X7 - and in another tweet he shares he's not a big fan of the device. It's the same story as with the N8 - the hardware of the Nokia X7-00 is good but Symbian^3 doesn't cut it (according to him, anyway).

From what we know about it, the X7-00 is like a C7 except for a bigger screen (possibly the same 4" AMOLED used in the Nokia E7) and the four speakers. But some new info has surfaced saying that there are only two loudspeakers despite the four grills in the corners of the Nokia X7-00 (which was the case with the Nokia X2).

Check out the first leak of the Nokia X7-00 for a few more shots and a short video.

True... I've noticed 4 home screens and no one mentioned it.

Oh really!!!, like the iPhone is the most gorgeous thing out there, or the SGS (which is an iPhone wanna be). I think that nokia is the only manufacturer that is making interesting designs, and atractive as well, not the "clonic" designs of...

FOUR HOMESCREENS! Im surprised not many of you mention that.