Nokia X aka Normandy pops up on Browsermark's database

Is there anything we don't know about the Nokia's Android phone codenamed Normandy? We already learned its name - Nokia X, we know its specs too - a 4" WVGA display, dual-core Snapdragon 200 chipset, a 5MP cam, 4GB storage, dual-SIM, six different colors, stripped down Android 4.4 KitKat. 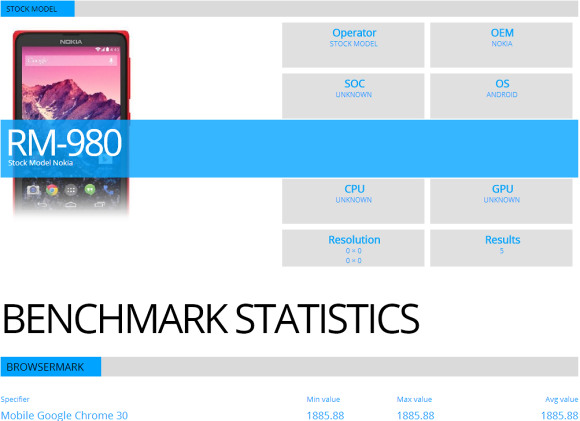 We saw the Nokia X leaks via AnTuTu benchmark. Today it has entered yet another benchmark database - the one of Browsermark 2. According to the submitted info, Nokia X's model number is RM-980 and its Chrome browser scores 1885.88 on the test.

Here is the Nokia X results compared to other popular smartphones.

According to the rumors, Nokia X won't be a Google certified phone, which means no Google Services including the Play Store. Nokia will reportedly provide its own application store, but the users will be able to sideload apps, too.

Anyway, Nokia X is expected to go official at the Nokia's pre-MWC event in Barcelona next month.

But nokia is launching this phone with 512mb of ram but all the kitkat phones is having ram of 2 to 3gb i think it is slow phone but i will buy it because it is nokia's first android phone.

you're wrong. It only means, that they don't want to use native google account functionality (like e.g. Lenowo and many other manufacturers)