New photos of T-Mobile's Samsung Galaxy S 4G give us a better look at the phone - and you shouldn't be surprised to hear it looks almost exactly like the Vibrant. It's similar on the inside too, save for the faster mobile data connectivity and a couple of other goodies.

The Samsung Galaxy S 4G is part of the Galaxy S line (the name really gives it away) but it uses an HSPA+ chipset capable of 21Mbps speeds. T-Mobile is calling it 4G, even though that's not technically true.

A video call camera graces the front of the Galaxy S 4G, which was omitted from the Samsung Vibrant. The regular I9000 Galaxy S does have a secondary camera though.

Anyway, another noticeable change seems to be the color of the back - it looks matte brown instead of piano black with a blue dots "galactic" pattern. This may be the fastest way to tell the Galaxy S 4G and the Vibrant apart.

The rest of the insides are unchanged from the mainline Galaxy S. Still, the Galaxy S 4G in the photos reportedly ran Android 2.2 Froyo, which may be the OS version at launch. The launch is slated for 23 February according to leaked slides. The first official announcement was vague at best. 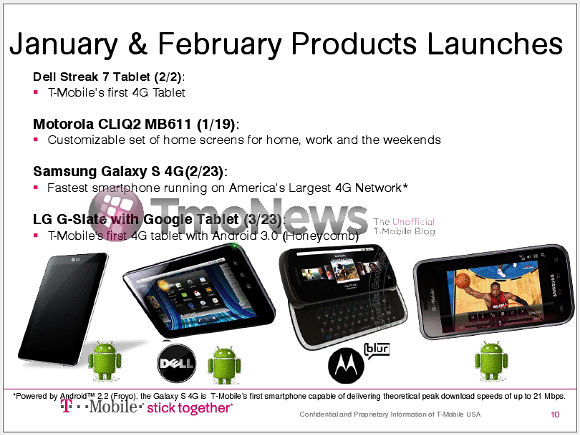 The Samsung Galaxy S 4G is expected to launch on 23 February, running Froyo

ya i was really hoping for a flash with the updated galaxy S. Darn, no flash still?!

when you buy Samsung they only repair your phone if there is a problem with your phone there is no replace product i got the Samsung vibrant have these power issue sent my phone to Samsung in for repair instead try to fix it they sent back...