With the Note10 duo, Samsung finally brought faster charging speeds to its flagships. The Galaxy Note10 goes up to 25W, while the Note10+ can reach 45W, but since both come with 25W chargers you'd need to pay extra to unlock the full speed. The new charger is now available for pre-order on Samsung's website and retails for $49.99/€49.99/£49.99, depending on where you live. Samsung claims it will be able to ship it out by September 13. 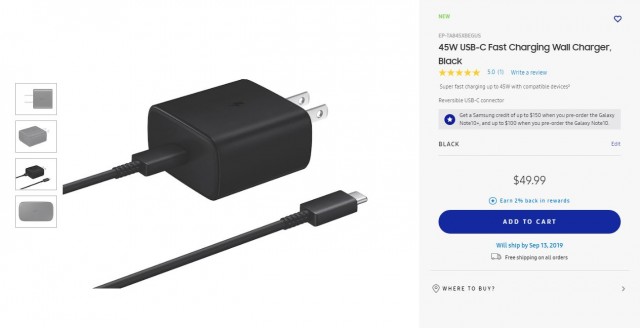 Just two days ago we came across a video comparison which showed that Samsung’s new 25W charger can fully top up the Galaxy Note10+ in just 1 hour and 5 minutes. That was enough to outpace even the 30W Warp charger which comes with the OnePlus 7 Pro as Samsung’s offering did less throttling as the battery started to fill up.

Meanwhile tipster Ice Universe managed to get hold of some Samsung training materials which brought info on the upcoming AKG noise-canceling earphones. They will cost CNY 499 ($70) and feature a type-C interface. In addition, they can reportedly eliminate up to 98% background noise.

Same thing happened to my S9+ , on 8.1 the battery life was amazing but after the 9.0 update, the battery life dropped a lot, I even charge my phone 2 times in 1 day. Sammy is the new Apple because the Samsheep accept their BS and there will many, ma...

different system, samsung supports Power Delivery 3.0, nobody knows what Huawei is supporting, try it if you wanna kill your phone fastly... anyway fasr charging kills batteries a couple of time faster than normal charging because you cannot cheat ...

no it does not, different system, samsung supports Power Delivery 3.0, nobody knows what Huawei is supporting, try it if you wanna kill your phone fastly...