MWC 2020 isn't happening, this much is clear by now. Companies dropped out one by one and ultimately the event's governing body canceled it altogether - an unfortunate consequence of the raging novel coronavirus outbreak in China.

One of the last remaining participants to announce it will be pulling out of the congress, Nubia has made it official. A statement posted on the company's official Weibo account says they respect the GSM Association's decision and will be postponing the Red Magic 5G's announcement. 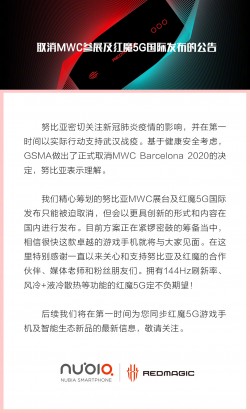 The upcoming smartphone that is set to be the first one with a 144Hz display will instead be unveiled in China. However, no specifics are set in stone for now as the company is regrouping and planning anew.

With "everywhere" I meant in my country. Just clarifying, everything is about in there

Well, I hadn't seen that kind of a speaker in a phone before Mix, not to say it surely was unprecedented, but it wasn't a highly innovative game changer; still better "innovation" than dropping the jack. You could say the Mix Alpha is like a folded M...

I realized that so I provided a TL;DR. The full version was for anyone who would enjoy my writing, like I enjoyed writing it. Not an author though.