We've had quite a few leaks about the upcoming nubia Red Magic 3 gaming smartphone and it's supposed to arrive as early as tomorrow, so the latest information comes ahead of launch.

A Geekbench listing score just popped up further confirming that the handset will indeed boast Qualcomm's latest and greatest - the Snapdragon 855. If there was ever a doubt, of course. 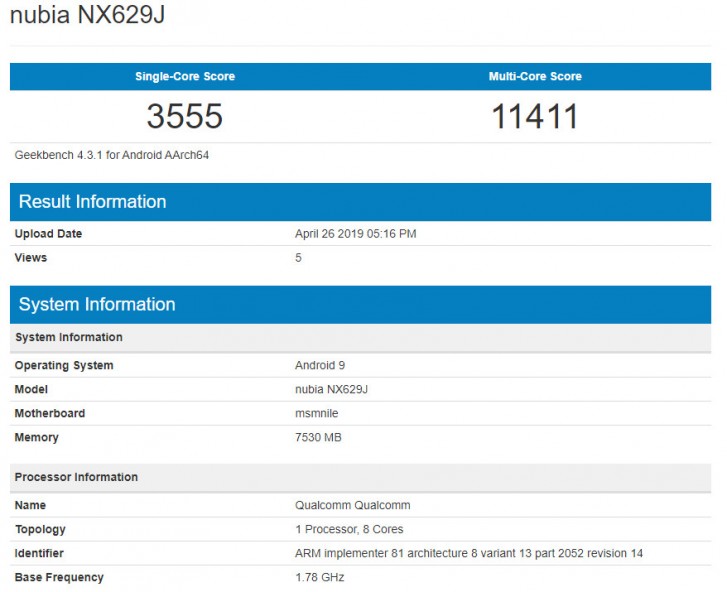 Aside from the chipset, the score sheet also reveals 8GB of RAM, but that's pretty much the norm these days, especially for gaming-centric devices.

Going by previous rumors, the phone will come with a built-in active cooling system - a fan perhaps - to cool off the Snapdragon 855 chip during long and intense gaming sessions. It sounds pretty ambitious and good thing we won't have to wait much longer to see if it's as cool as it sounds.

It's because of the way the programming languages handle memory. Java (android) has garbage collection whereas swift doesn't.

This has usbc 2.0, can this be hooked up to a monitor? if not then this is a trash gaming phone

Even with a lot of RAM some phones still reload apps, some manufacturer better optimize their RAM Management. But Android mayhave it's limits, even a Galaxy S10+ with 12 GB RAM reload more apps than an iPhone XS Max in this video: https://www.youtu...