Nubia warned us that the software version on our unit isn't final so there might be some issues that need to be resolved. Same as last time, we find the translation a bit awkward at times but nothing too major. We are glad to see the battery menu making a comeback and you can finally set a battery percentage. And at first glance, the navigation through menus and apps feels a bit smoother than before. Animations also seem to be a bit faster giving you that snappy feel. 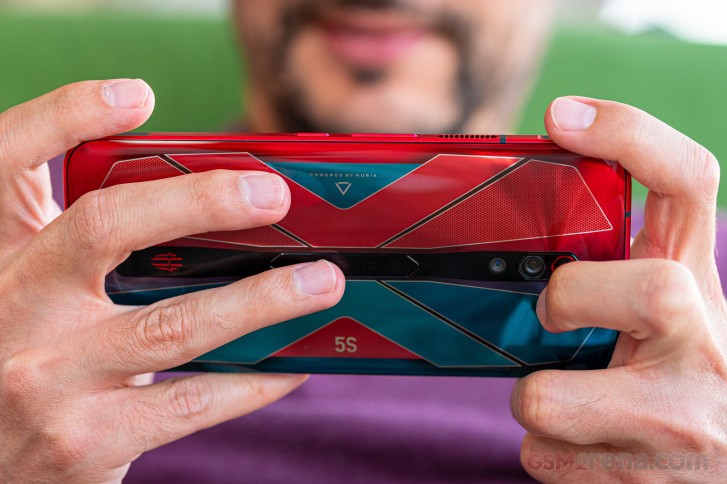 Other than that, the software looks kind of stock-ish. There aren't many tweaked UI elements - the drop-down menu has the same appeal as in the vanilla Android. Some of the quick icons do appear in green instead of blue, however, making it easier to distinguish the different settings. The recent apps menu remains unchanged, and the general Settings menu has new colorful icons so you can navigate easily.

And like most highly-customized Android skins, nubia's Redmagic offers a handful of cool software features, aside from the strictly-gaming related ones, about which we will talk about later.

The Always-on display option is one of the first things we've noticed. The always-on screen is highly customizable with various clock styles and graphics. You can even set a short clip or GIF to be displayed on top. Speaking of the screen-related features, you can also set the refresh rate frequency to 60, 90 or, of course, 144Hz. You can expect the best possible battery life from the 60Hz mode and deteriorate with the 90 and 144Hz. Perhaps 90Hz remains as a sweet spot, as nubia has pointed out in the description.

Aside from its role in gaming performance, the cooling fan can also be used to cool down the phone during charging. We couldn't see the benefits when using the 18W charger, but we were told that the fan kicks in to allow for better thermals during charging and also prevents the charging process from causing thermal throttling. The Cooling fan sub-menu is there to adjust the fan speed. You are presented with two options - automatic adjustment of the fan's speed and the maximum speed for faster and more efficient cooling. Given that the sound coming from the fan isn't loud or obnoxious going for the second option is advisable. It is a little high-pitched, though, so keep that in mind.

As far as navigation goes, the Redmagic UI gives you a choice between the standard Android 10 navigation gestures, swipe up from the bottom gestures and the good old software buttons.

Oddly, there's a menu called "neo AI" that's mostly about explaining how the neo AI works. A couple of slides talk about the game recording feature, the cooling fan, and the automatically adjustable screen refresh rate. As you've probably guessed, the phone monitors the CPU and GPU's temperature and applies fine control over the cooling fan. And depending on the application, the software adjusts the screen refresh rate - if it's a static image or a video, it will switch to 60Hz, and if it's a game, it would default to 144Hz. It does so with games as well - if the game doesn't support high-refresh rate, it would lock to 60fps.

Surely, you play some games more often than others. With neo AI, the system learns from your behavior, utilizes the system resources, and launches those games faster. During the night, the system will use the time to clear the clutter from the system memory. The neo AI also tracks apps that you don't use and freezes them, or in other words, suspends all the app's processes to conserve energy.

And even though the fingerprint reader remains unchanged, the developers team definitely did some tweaking and optimized it through software. It's now way more reliable, although it's not the fastest one we've used. It's not something you should worry about as it's considerably better than before. 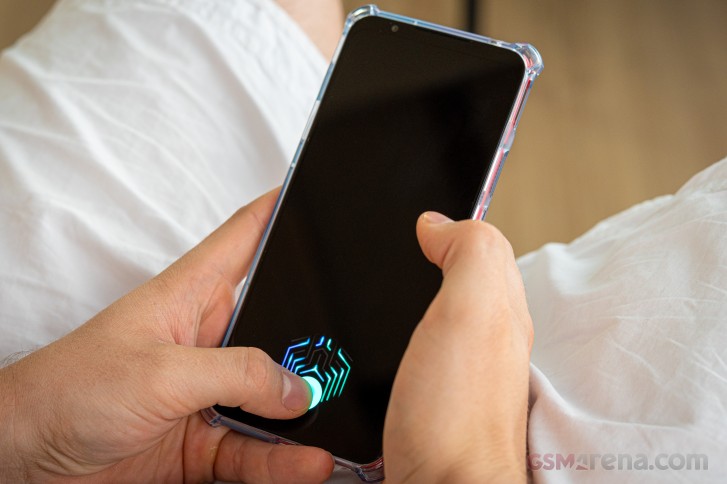 One thing we've missed in our previous review is the Small Window feature. It essentially scales down the active app into a small window by pulling down the drop-down menu and tapping on the Small Window toggle. This might come in handy during gaming but we struggled to find any apps that are supported. We've tried some of the system apps and Google apps but we were unsuccessful. It might be an issue with the software.

We see the return of Game space in the form of version 2.1. It's more polished this time around and gives you more options to play around with. At least compared to the older iteration running on Red Magic 3 and 3s. 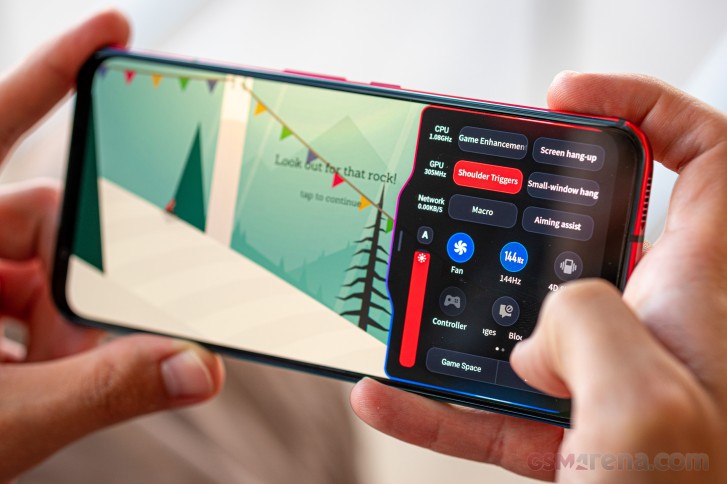 Anyway, flipping the red switch located on the upper-left corner of the phone will summon the Game space 2.1. You will be presented with a list of games along with a quick switch for the back LED lighting and the cooling fan. Pulling the menu from the right side opens up a drawer with a couple of quick settings like fan toggle, 144Hz screen mode, block calls, and quick screenshot.

There's also a quick shortcut to set up the shoulder triggers. It opens up an overlay menu with buttons representing the triggers. All you have to do is drag-and-drop them on the actions you'd want them to "trigger".

A dedicated button for combo execution is also at your disposal. Games that require a series of button presses can benefit from a one-click combo tap.

The Game Enhancements button, on the other hand, is all about fine-tuning the hardware to your liking. You can boost the CPU, the GPU, or both to increase performance. Of course, it goes without saying that this would have a negative impact on battery life and the fan will probably start spinning faster to compensate for the extra heat.

Additional settings for the screenshots, screen recordings, fan control, LED customization and a summary of how much and what you've played for the day and the whole week can be found in the personalization menu in the upper-right corner.

Unfortunately, we don't have the controller or the docking station so we can't go into detail about those accessories, but they do offer some additional options in the Game Space 2.1 menu.

And aside from some of the confusing translations, we didn't have any issues with the Game Space itself. In fact, the floating window for incoming calls during gaming is pretty neat and surprised us there were no issues arising from the overlay.

And we can't miss noting that the shoulder triggers really make a difference in some game genres. They are particularly useful in first-person and third-person shooters. Say you map the left trigger to aim down at sight and the right one for shooting, it's much easier to control your character that way than using the software buttons on the screen. You also get a nice tactile and haptic feedback from the precise vibration motor (kudos for that), and you can also adjust the pressure at which the triggers react. After all, nothing beats hardware buttons when it comes to gaming. 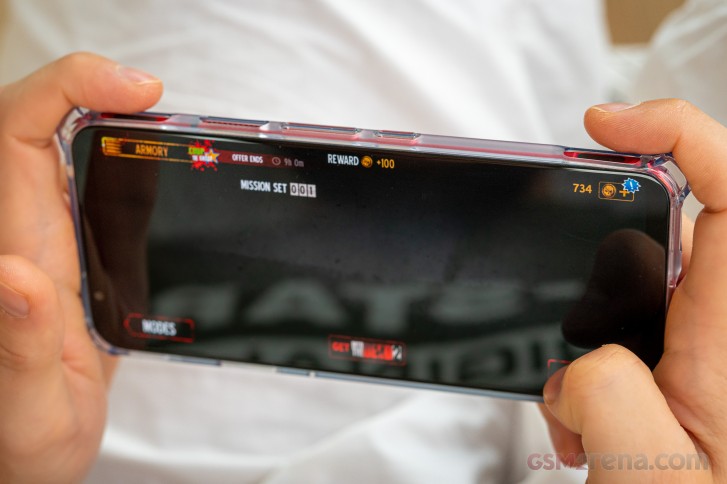 Finally, nubia brought to our attention a really cool under-the-hood optimization feature that we were previously unaware of. It's called Touch Choreographer and it's essentially an adaptive-sync-like feature. Let's say the display runs at 144Hz while the game is running at 137fps. The software then tries to compensate by inserting additional frames (most probably black frames) so it can compensate for the loss of frames and still make the gaming experience look smooth. Or in other words - interpolation. 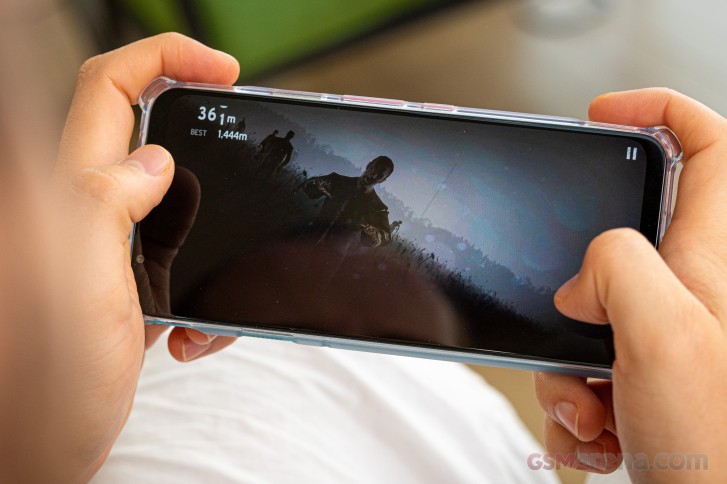 More importantly, though, the Touch Choreographer can adjust the screen's refresh rate dynamically during gameplay to avoid any choppiness and stutters. For example, you've set the refresh rate to 144Hz but the game only supports rendering up to 90fps, so Touch Choreographer will lower the screen refresh rate to match the outputted frames avoiding stuttering. But it's not capable of granular control like the real adaptive sync technologies on modern PC monitors, for example. It has a couple of pre-defined steps - 60, 90, 120 and 144Hz and the software chooses the one that's closest to the game's maximum output.