The ZTE nubia Z17 mini had great success in China just last month as the ZTE sub-brand device went on to sell out tens of thousands of units in less than a minute. Despite this success of the Z17 mini, we are still in the dark waiting for the lights to come on with the nubia Z17 (non-mini). Lucky for us smartphone fanatics, someone at ZTE/nubia accidentally published an official listing right in nubia’s webstite. Thankfully, someone took a screenshot before the mistake was promptly taken down.

ZTE’s episode unofficially confirmed a couple of pieces of information. First of all, we’ve got a perfect look at what the device is supposed to look like. Unlike the Z17 mini, the Z17 will have a vertically stacked dual camera setup with the fingerprint scanner placed just underneath. Additionally, the front of the device will feature an dual-edge display with, virtually, no side bezels. 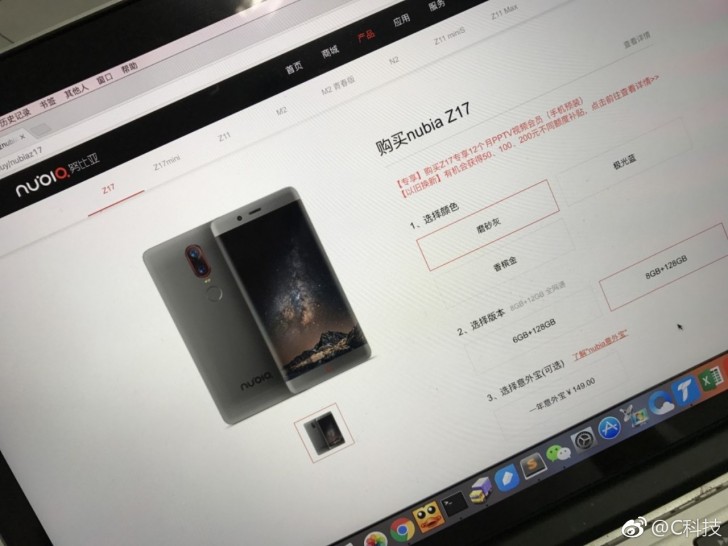 The leaked photo also reveals that the Z17 will come in two memory configurations in China: 6GB+128GB and 8GB+128GB. And finally, we were able to translate some of the text in the photo and we found three colors options: the one in the leak is called “frosted gray” while the other two are “aurora blue” and “champagne gold”.

A Qualcomm Snapdragon 835 has previously been spotted on this device as per a benchmark leak, though in a configuration with 4GB of RAM, which is either pre-production hardware or headed for a region other than China.

This leak smells fishy and I hope it's fake. I don't believe that Nubia will release their flagship without their bestseling and iconic black and white color options. It just doesn't make sense. This and the ugly placement of the cameras on the...

Since it's a Nubia I hope the launch price is dirt cheap.

Finally someone who gets that more ram is not a gimmick but something that actually impacts performance in the long run (both through the voe of the phone, plus the long term view of the industry itself)