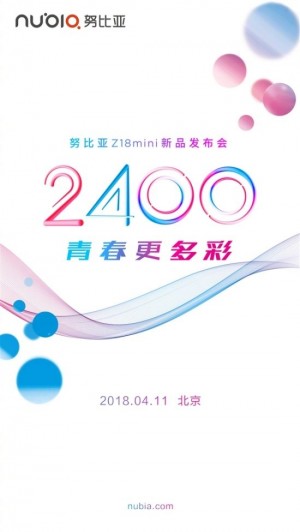 First, it was the nubia Z5, followed by Z7, Z9, and Z11, but then numbering leaped to Z17. So can you guess what the name of the next series of the ZTE subbrand is? Why, the Z18, of course. Yes, nubia is apparently now matching the calendar year with its model numbers.

The first phone from the Z18 series is going to be called nubia Z18 mini, according to a press invite the company sent out. The phone is said to have 24 MP dual cameras and will be announced on April 11.

The mini version of the expected Z18 flagship lacks any specs in the rumor mill, but it will probably be much more capable than the mid-range nubia V18 device that arrived two weeks ago. Since the event is going to happen in China, the phone will likely have the latest nubia UI version instead of stock Android, as previously reported.

How's Nubia's camera performance? Will anyone please enlighten me?

More mini devices! The real poll what people want is clear separation - large screen phablets with a notch against mini devices without the notch. Then we'll see which is more popular.