"For business reasons, the product has been canceled." And so the Nvidia Shield 2 tablet ends not with a bang, but with a letter to the FCC.

Nvidia launched a number of great GPUs - both gaming and professional - in quick succession and to great acclaim. Its embedded products are seeing high demand from companies working on autonomous cars (Nvidia GPUs running computer vision algorithms written in CUDA).

And yet the Android console market is proving a tough nut to crack, even for the GPU giant (it's not just the Shield tablet, the Shield TV is over a year old, but there's no peep about a sequel). 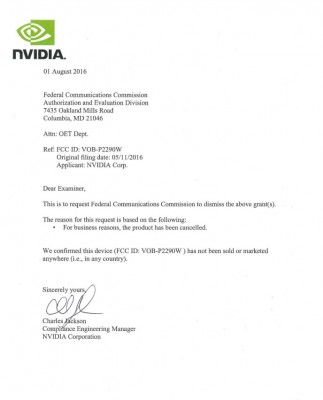 An official letter of sadness

Perhaps Nintendo could change Nvidia's fortunes - the upcoming Nintendo NX will reportedly have a Tegra chipset at its heart (with a Pascal GPU). The NX will be a tablet for gaming on the go, not unlike the Shield, but a dock will enable a more traditional TV-connected console experience. It won't run Android, though.

so gamestream capable GPUs are useless, nice. As far distance as I see I only use a Qudro GC in my office xeon workstation.

I'm honestly dissapointed about this