HTC HD2 just can't stop peeping out from all possible corners. This time though the HD2 is officially revealed in an O2 retail catalog in an ad, which is warming the scene for an expected UK release on 12 October.

You surely remember the first time we saw the HTC Leo, only to to surface again later on as HTC Pro Three and finally revealing its true marketing name of HTC HD2 - losing the Touch branding of its original somewhere along the way.

The 4.3-inch monstrous HD2 is driven by 1 GHz Snapdragon CPU accompanied by 320MB RAM and 512MB ROM. All connectivity options you can think of are on board along with a 5 megapixel snapper and a 1230 mAh battery - and it seems quite thin as well. 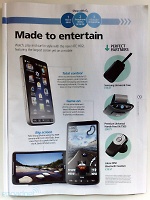 The page with HTC HD2 from the O2 catalog

Well, we will know all details on October 12 when the HTC HD2 will be launched in the UK.

How much will it be?

sad but true??? whats sad but true is that ur probably on some kind of drug!! the 4.3 inch sceen on this has the same resolution as my xperia (480x800) which has a 3.0 inch screen and it has LOADS of apps available for it which will DEFINITELY also w...