As we reported three days ago, HTC is hosting an event on September 1st (a day before the IFA kicks off in Berlin). HTC is supposed to announce the WP7 Mango-based Eternity and Omega on this event.

Today we have an official picture of HTC Omega. The smartphone looks like most other HTC handsets and has a white/silver paintjob. 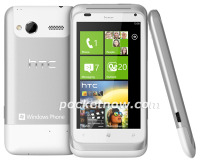 HTC Omega is rumored to feature a 3.8-inch SLCD WVGA display, an 8 megapixel snapper with LED flash plus a 720p camcorder and should be based on Qualcomm's MSM8255 Snapdragon core with a 1.5GHz processor and 512MB RAM. As the rumors has it, the Omega might be just a codename and it's retail name may be HTC Radar.

September 1st is just around the corner when all the details about Omega and its high-end sibling Eternity will be cleared.

RAM is not measured in hertz it is measured in bytes. And there is little need for a full gigabyte on WP7. Although with mango being more beefed up it might not hurt to have 1GB RAM

2012 is going to be a tough year for Android. Those who bought Android phones will probably change OS as per latest surveys with WP7 likely as the one benefitting.

And you're absolutely entitled to that opinion. You're right that a lot of consumers care more about ease of use than technical depth. Most people won't root their devices and multi-boot between Android and Ubuntu linux or even consider overclocking ...