Early this year Omate showed off some smartwatches, including the 2G-enabled Roma. Those weren’t Android Wear watches though. Now the company is back with the Omate Rise – a 3G-enabled Android (not Wear, full Android) watch.

Unlike the latest crop of smartwatches, this one uses a regular SIM card – a microSIM, not even nano. Great news if your carrier doesn’t yet support the e-SIMs used by the likes of the Samsung Gear S2. Also, the chipset supports 1,900MHz (US) and 2,100MHz (EU) 3G bands, plus quad-band 2G/EDGE.

The Rise will be offered for pre-order on December 7 with a unique 48-hour IndieGoGo promotion. Super Early Bird and Early Bird backers will get a free Bluetooth Heart Rate Monitor (by Nordic Semiconductor), which normally costs $50. The watch itself does not have a heart rate sensor.

Prices for the watch will be $200 and $210 for the first 500 backers of each Early Bird deal, the full retail price is expected to be $350 when the watch launches at the end of March.

The Omate Rise features a fully round 1.3" display (360 x 360px) with sapphire coating. The screen is surrounded by a carbon fiber bezel –the reason for the IndieGoGo campaign, the company needs $30,000 to buy the tooling to manufacture it.

The watch is powered by MediaTek MT2601 chipset (dual-core Cortex-A7 and Mali-400) with 512MB of RAM and 4GB of storage. Connectivity and sensors include Wi-Fi b/g/n, Bluetooth 4.1, GPS, microphone + loudspeaker and, of course, 3G. The battery is good for two days of use. It has 580mAh capacity. 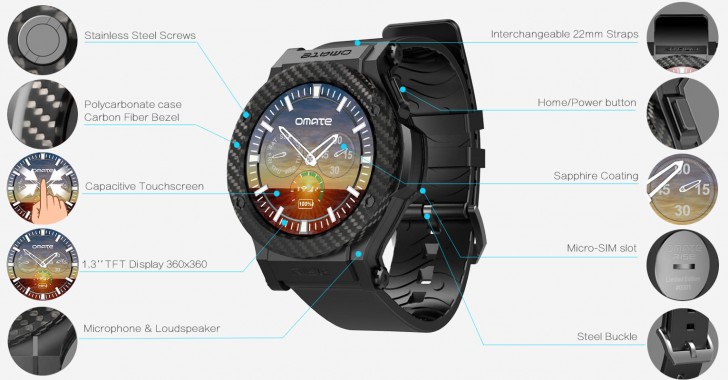 The watch is rated at 1 ATM water resistance and features replaceable 22mm bands. The Rise runs Android 5.1 Lollipop with Omate OUI 4.0 on top (it's compatible with Android 4.3+ and iOS 9+). Omate has already open sourced its code at XDA-Developers so devs can play with it.

Again, the IndieGoGo campaign starts Monday, December 7 at 10am New York time and will run for only 48 hours. If you want one, it's best to get one of the Early Bird deals – for the price cut and for the heart rate monitor, later units will be pricier and you'll have to bring your own HR sensor.

Will this work on Bell Mobility?

There are dozens of smartwatches that can accept SIM cards and be used as a standalone phone/smartwatch.