One X for US running different ROM to avoid Apple's patents

Yesterday, we reported that the AT&T version of the HTC One X and the EVO 4G LTE are being detained by the US customs as per the court order by ITC for violating one of Apple's patents. Now as it turns out, these particular phones aren't using Apple's patent to begin with. 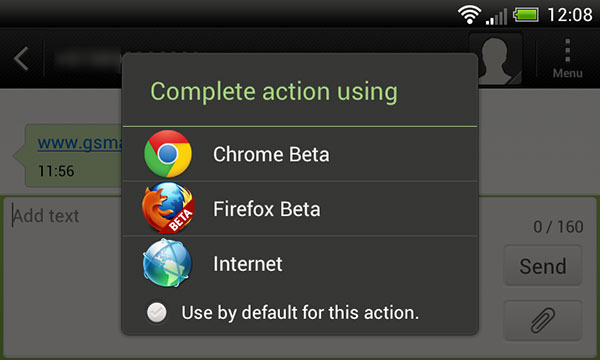 Once again, The Verge is reporting that the AT&T One X and the EVO 4G LTE don't have the data tapping feature found on the international version of the One X. For those who are not aware, this feature lets you tap on numbers, email addresses or links in messages and show a menu of options, a feature that has been patented by Apple.

On the international version of these phones, clicking on, say, a web URL, will give you a list of apps that you may want to open the link with. However, the US models will directly launch it in one of the apps and if you want to change which app the phone uses to open the link you will have to go to the Settings menu in the messaging app, where you will find a new option called 'App Associations' not found on the international models. Once you select the app, the phone will use it launch the associated links every time you click, thus never showing the menu at all.

Due to this, the US models of the HTC One X and the EVO 4G LTE are effectively not guilty of infringing on Apple's patents. Now it depends upon the US customs whether they still allow the phones to pass through.

A patent for a popup that allows you to choose an app to open a file/take an action? Wow, now that's ingenious... Oh wait, Windows and pretty much all OSes have done that before...

I'm totally agree w/ you! It's actually an exclusive feature of ICS if i'm not mistaken..

why does apple think they have all the science of the world? think they CAN dominate? they're the ones who should be banned for making patents over something that is so not important. make innovations apple, not domination. well iphone sucks though..