After a week-long teaser campaign and many prior leaks and rumors about it, the OnePlus 3T has finally been made official by the Chinese company today. It looks exactly like the OnePlus 3 (having the same dimensions even), but there's a new color option called "Gunmetal".

On the inside a few things have changed, however. First off, as rumored ad nauseam the 3T is powered by Qualcomm's Snapdragon 821, replacing the SD820 in the older OnePlus handset. The OnePlus 3T has two storage capacity versions, 64 and 128GB respectively, both of the UFS 2.0 kind. 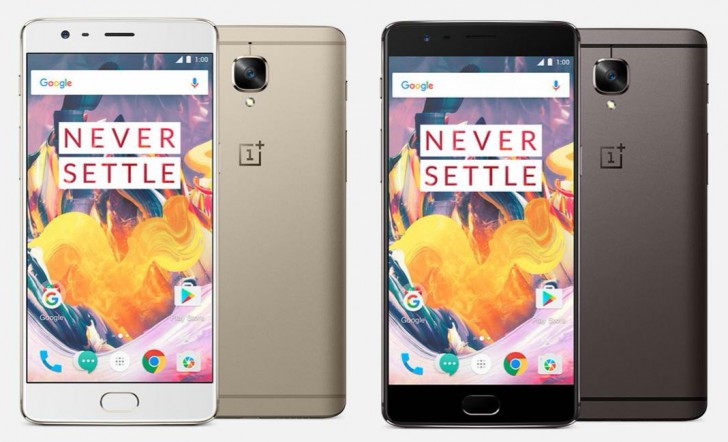 The new phone's rear camera has remained unchanged from the OnePlus 3, with only a sapphire crystal cover added for improved scratch protection. On the other hand, the selfie snapper has received a huge boost in resolution - whereas the OnePlus 3 has an 8 MP Sony sensor, the 3T comes with a 16 MP Samsung-made snapper. The aperture remains the same f/2.0, while pixel size has shrunk from 1.4 nm to 1.0 nm. The exact sensor used is the Samsung 3P8SP, and the selfie cam has phase detection autofocus and support for capturing 1080p video at 30fps.

Finally, the last improved spec might prove to be the most important one for many people - we're talking about the battery capacity. The OnePlus 3T has a 3,400 mAh cell, 400 mAh more than the OnePlus 3. That should obviously ensure better overall battery life. The 20W OnePlus Dash Charge is still supported, and this should translate into very fast charging times. The 3T still runs Android Marshmallow, despite some rumors claiming it would launch with Nougat on board.

The OnePlus 3 was initially available in silver, then a "Soft Gold" version was launched. The OnePlus 3T will be out in "Gunmetal" and "Soft Gold" on November 22 in North America and November 28 in other territories, purchasable as usual directly from the OnePlus online store. It will start at $439 (with 64GB of storage), which is $40 more than the OnePlus 3. The 128GB variant will go for $479. In the EU the prices will be €439 and €479, respectively.

Pictures aren't my priority as I still have my Nokia 808 and 1020. But now that you've raised issues with the camera, I'll go for the HTC 10.