The OnePlus 5 runs the latest Android version available, 7.1.1 Nougat. There's a proprietary layer on top that OnePlus calls OxygenOS, and we have a soft spot for it - it's feels a lot like stock Android, but boosts functionality. Additionally, a lot like Xiaomi's MIUI, OxygenOS has a very active community of users and devs constantly at work on new features. 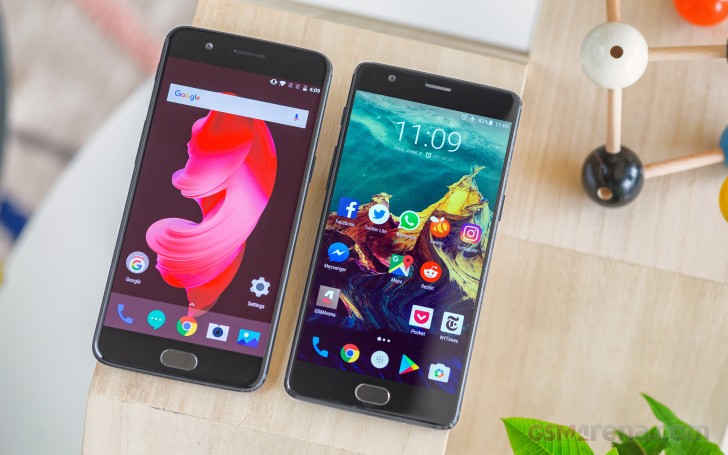 The OnePlus 5's fingerprint reader is one of the fastest we've seen. The setup process relies on the standard manager interface to get it up and running. It does seem to require a few extra taps than usual, but that's a one time thing and far less important than the speed of recognition.

While the screen is still off, there are also quite a few gestures to enjoy. There is the popular double-tap to wake, but you can also draw letters or symbols on the screen to do stuff. For instance, draw < or > for previous/next track, or || (two finger swipe) to pause. The letters O and V could be used to launch apps on the 3T, and OP has now added three more letters - S, M, and W. You can assign any app to them, or use them to turn on the flashlight, or go straight to the selfie cam. Beyond that, there is also flip to mute and a three finger swipe down gesture to capture a screenshot.

The lockscreen itself is the usual affair. Missed notifications show up here, now with Nougat's grouping and expansion capabilities. Swiping left or right will fire up the dialer or the camera.

The Oxygen launcher is incredibly clean and very close to vanilla Android. There are, however, a few notable upgrades. For instance, the launcher has a feature called Shelf, which is in place of your leftmost homescreen. Here you can see the weather, your most used apps, and frequent contacts. You can also add widgets and change the header image. You can disable or enable Shelf at will.

Shelf • Adding a widget • Bottom of the Shelf

The notification shade is another stock Android affair. You can lower it with a single swipe from anywhere in the UI (that's a setting though, and it's off by default) and an additional swipe will reveal the entire list of quick toggles. You can also use two fingers to bring down the whole thing in a single motion. The brightness slider is complemented by an Auto switch, and we really wish Google would finally build this into stock Android.

Oxygen OS offers a lot of granular control over notifications and permissions on a per-app basis. You can also hand pick the icons that show up in the status bar.

The app switcher has a neat card interface that allows you to select the app you need by swiping up or down. You can close apps by swiping left or right, or use the 'kill all' to get rid of them all. A padlock icon in the top right corner of each card lets you select ones to spare.

A screen-pinning feature lets you lock the view on one particular app, and you can set it up so the phone locks itself when you unpin it. Multi-window is another feature, native to Android now (since 7.0 Nougat), and you get it on the OnePlus 5 too. The split is 50/50 or something like 30/70 with either more on the top, or on the bottom.

Hidden away in the advanced settings menu is a new menu that lets you choose how your recent apps get cleaned. The default mode does just what you would expect on any other Android device - clear the stack of recent foreground apps. Selecting "deep clear" goes after background services as well, though that does also mean that many messengers and other real-time apps will likely stop functioning correctly until relaunched manually or the phone is restarted.

OnePlus has always put great emphasis on customizability. Like the previous model, this is woven throughout the device from hardware all the way to software. We've already mentioned that Oxygen OS lets you easily choose between using the phone's capacitive keys or on-screen controls for navigation. You can even remap and rearrange said controls - the Menu and App Switcher keys can be reversed, plus you can assign custom actions upon double-tap and hold.

Lots of customization options for the various inputs

OnePlus didn't leave out its iconic three-way mode slider either. As already mentioned, it now toggles between three Alert modes - silent, do not disturb and ring. Each mode actually has some additional configuration that can be applied. For Ring, there is currently only a vibration toggle, but if you go under Do Not Disturb, you can really fine-tune who and what can and can't get to you. You can also select the pattern of your vibration.

Alert slider settings • What, no ZB-BZ?

Finally, the launcher also has quite a few style customization options. There is the simple Dark mode toggle- it should probably be your first choice, since AMOLED power consumption decreases greatly, the darker the UI gets. There are some other trivial options, like wallpapers and a few less than standard ones, like changing the style of the Google Search widget, tinkering with the icon size or even selecting a different icon pack.