The OnePlus 5 was recently listed on OppoMart at a price of $450. That’s not that a lot of money for the kind of specs being talked about - including 8GB of RAM. Check out this leaked screenshot of the About screen, which shows that much RAM plus 128GB of storage.

Notice the software, Hydrogen OS. This means it's from the Chinese version. OppoMart (the store that leaked the price) lists only 6GB of RAM in the specs. It’s possible this is a local version (more RAM is necessary in the region as competition is tough). Then again, OppoMart isn’t terribly reliable when it comes to leaks. 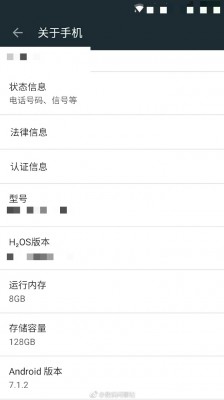 Still, as OnePlus managed to sell a phone with 6 gigs of RAM for $400, it’s possible that a year later chip prices have fallen enough to go up to 8. And rumors suggest the company will not be changing its habits - offering the best hardware it can get its hands on at around half the price of big brand flagships.

We’ve been hearing that OnePlus will make the jump to QHD resolution while also grabbing a Snapdragon 835 chipset and a higher resolution camera to boot. And the max storage will double yet again to 256GB.

I was using note 5 since it was released and wanted some change as the oneplus would be the next cheapest best option i assume as Dual sim and better battery performance i assume.

The OnePlus 3 and 3T are nice phones. And the OnePlus 5 sounds promising (although the price is starting to inch out of the flagship killer category into the just another flagship category). But the thing that OnePlus really needs to do (has bee...

You dont get it. Its not about number of gb of ram. Its about mobile SoC, designed for a mobile platform that has to equalize resource/benefit parameters of mobile, all depending on passive energy source battery. You could try adding an...