OnePlus 5 uses the same display panel as the 3T

The OnePlus 5 uses the same screen as the OnePlus 3T – no, we don’t mean the same specs, it’s the exact same panel. AIDA64 detects a Samsung S6E3FA5 panel on both devices.

This is a change from the original OnePlus 3, which had an FA3 panel. It’s not entirely clear what the differences are between FA3 and FA5. Still, the OnePlus 5 has no hardware improvements over its predecessor, at least as far as screen is concerned. 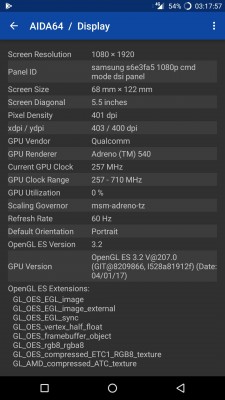 Actually, our review shows a slightly lower maximum brightness and a slightly worse sunlight legibility for the OnePlus 5 compared to the 3T (which itself was a bit worse than the 3). What about DCI-P3? That seems to be a software thing (like how OnePlus enabled sRGB with an update).

The only thing OnePlus didn't settle is price. Everything is same lame old 3T except price

have the 1+3, so not going to swich to 1+5. I was hyped to buy it, but i just stoped for few minutes and thought about it. Maybe next year, when they implement stereo speakers (one should hhope).