Recently, the usually reliable tipster Evan Blass (@evleaks on Twitter) - citing information from the source code of the OnePlus 5 teaser landing page on Amazon India - revealed that the device will come with 8GB of RAM.

Now, the device has surfaced in a benchmark listing on Geekbench, with the listing confirming the 8GB RAM figure. 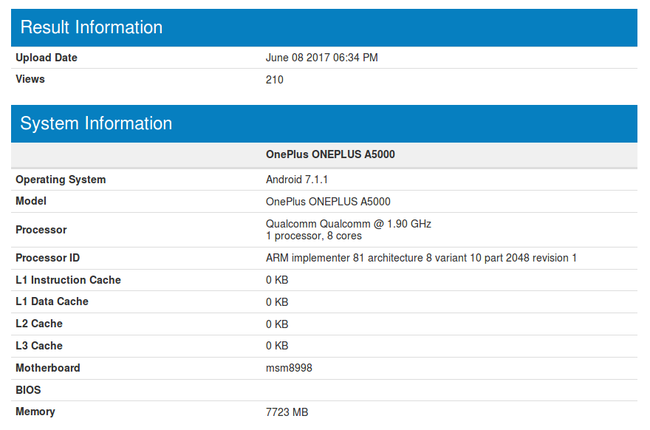 Aside from this, the listing also reveals Snapdragon 835 chipset, something which has already been officially confirmed by none other than the Chinese company's CEO Pete Lau.

The phone, in case you aren't already aware, will go official on June 20. It will make its India and China debut on June 21 and June 22, respectively. Over in the UK, carrier O2 has confirmed that it will be carrying the device.

Tried out a ramdisk, thousands of MBs per second its crazy and that's with several year old ddr3. If android O delivers completely cpu call free background processes, that will be amazing. Just need some cheap 64gb ram sticks then.

Yeah, that's what I'm taking about. Android O will limit rogue background services. So keeping apps in memory would simply mean no need to reload ... *ever* because all is loaded directly to/from ram. Storage would only matter when you reboot, or get...