OnePlus has launched the OnePlus 5T in the stunning Lava Red edition in India. The phone is now available on Amazon India and OnePlus.net alongside the original Midnight Black color. The Lava Red variant will only be available in the top of the line 128GB capacity at INR 37,999 ($595). 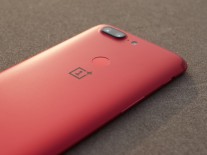 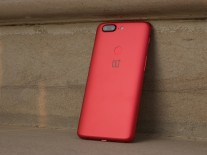 We have a unit with us and I must say the color looks quite striking. Unlike Apple, OnePlus chose to have the front in black, which was a wise decision. The red color itself does change considerably depending upon the lighting and how you hold it. At best it looks a fiery red, more in line with its name. However, at times it also takes on distinctly pink hue.

Apart from the color there is nothing different about this variant. The finish of the back is identical to the Midnight Black color. The box it comes in the standard affair. Its just a standard version in a different color, unlike the Star Wars Limited Edition we saw previously, which is no longer available.

We do wish OnePlus had rolled out all the colors during the original launch so those who bought the phone then would have had more options to choose from but those buying it right now will definitely be feeling lucky. That is until the next variant rolls out.

Butshit if you said about privacy all smartphone are there hole for hacker and government see us so what is privacy? In IT there are no 100% secure system. But not published for security and anti trust problems. Think twice if you said one plus not s...

Nobody is ever happy with what OnePlus does. Every little thing is a huge problem. If someone found that LG had a small bug nobody would care as much as people do with OnePlus.

All of you guys' privacy comments on OnePlus are bull***t