OnePlus 5T to arrive on November 16

Yesterday a photo of the OnePlus 5T appeared, along with a teaser from Carl Pei, OnePlus co-founder. Now a leaked image popped up, suggesting a November 16 launch date, which is 4 days earlier than the previously rumored one. 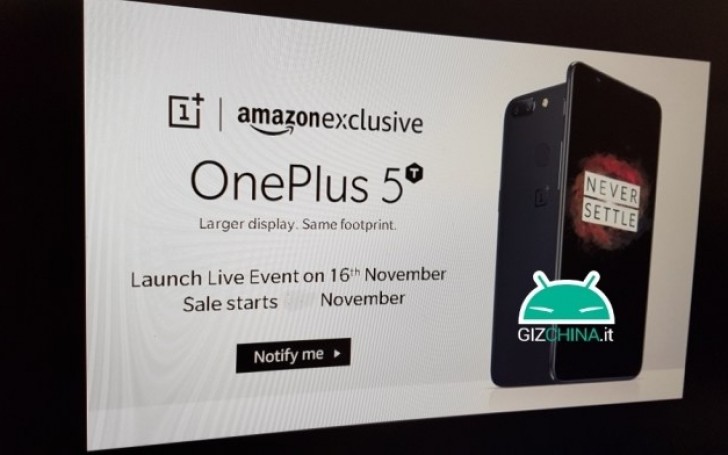 The image says “Amazon Exclusive” and it likely originates from India, since the current flagship OnePlus 5 also was sold only through Amazon there. For some reason the sale date is edited and unavailable.

The picture also states “Larger display. Same footprint”. We expect to see an 18:9 FullView display on the OnePlus 5T and the fingerprint would go on the back, as the image vaguely suggests.

OnePlus 5T should arrive with Snapdragon 835 chipset and 6 or 8 GB RAM. The camera is expected to come with 20 MP + 20 MP setup, according to an AnTuTu listing. It also said the OS will be Android Oreo 8.0.

some people care because they put lot of money in the phone, In india it cost 38000 for 128 gb which far more expensive than other countries. And also, they cheat with their loyal customers i was the oneplus one user & now oneplus 5 i love both p...

I know that all. I also own the oneplus 5. its really fast, camera is great everything in just half price of high end mobile. I just want that if they want to launch a new mobile in just 1-2 months they should tell their customers before launching an...

oneplus does not even fall in Nokia 8 category