OnePlus 5T shows up in Geekbench database with Android 7.1.1 on board

Next week we'll finally see the grand unveiling of the OnePlus 5T, a smartphone that just can't keep itself from being in the news every single day. Today a test run by someone with a prototype has surfaced in the Geekbench database, and this gives us some new information about the device, and confirms some old rumors.

First off, the OnePlus 5T will have the model number A5010, emulating the naming scheme from last year when the OnePlus 3 was A3000 and the 3T was A3010 (the 5 is A5000 as you'd expect). Next up, it's still sporting the Qualcomm Snapdragon 835 chipset, which is no surprise because the chip maker hasn't outed a better offering yet. 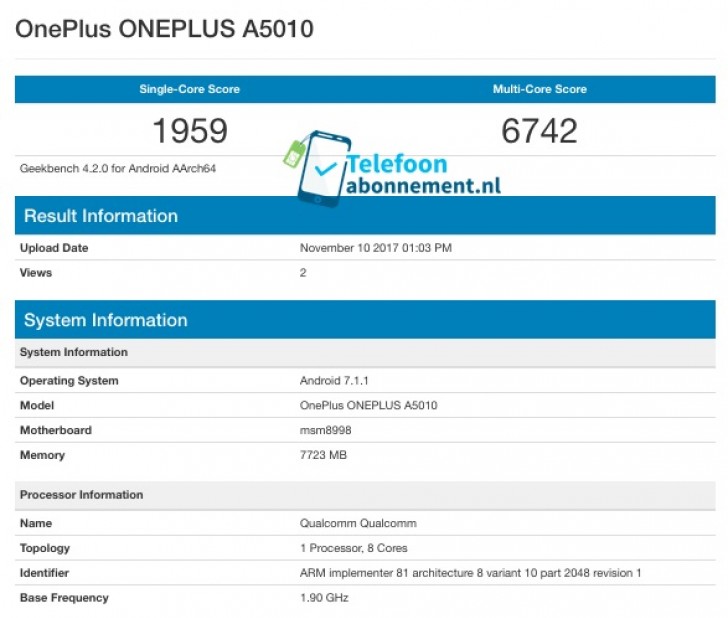 What's more surprising perhaps is that the OnePlus 5T is running Android 7.1.1 Nougat, and not Android 8.0 Oreo, a version which was released by Google back in August. On the other hand, remember that the OnePlus 3T launched last November with Marshmallow on board, so history seems to be repeating itself in this regard too.

The prototype spotted in Geekbench had 8GB of RAM, but we expect the entry-level model to come with 'just' 6GB. The OnePlus 5T received a 1,959 single-core score and 6,742 multi-core score.

According to Geekbench's charts, that puts it slightly ahead of other Snapdragon 835-powered handsets in the single-core category at the moment, and even more so for multi-core. The Xiaomi Mi 6 currently leads the SD835 pack in the former with a score of 1,903, while the Galaxy Note8 with Qualcomm's SoC scores 6,301 in multi-core beating out the competition.

People dont understand, Oreo and Google, have guidelines for OEMs. Out of all Android versions recently, Oreo is major upgrade, introducing project Tremble, which in the guidelines, all phones COMING with Oreo outofthebox, MUST support it. All t...

The Unboxing and hands on video of 5T has been released before itself official release. Lol man, the YouTuber is in big trouble