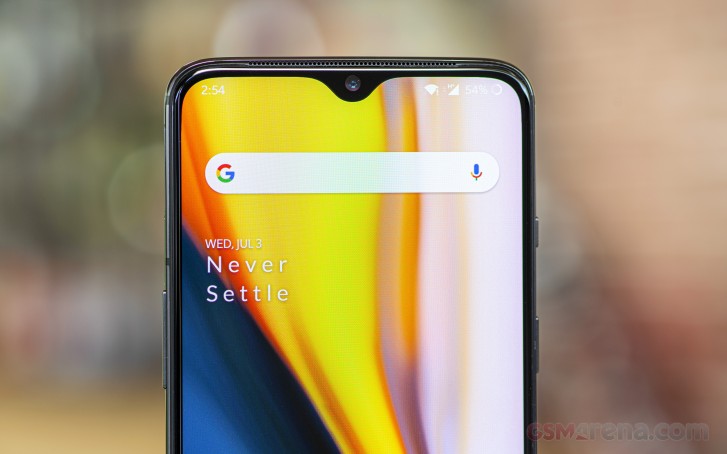 Our lab tests did show one difference, even if that has to do with the controller rather than the panel itself. The 6T and the 7 both have similar maximum brightness - 453 vs 443 nits, respectively. But while the 6T doesn't offer an additional boost in brightness when the ambient sensor detects bright sunlight, the 7 can actually go up to 642 cd/m2 for short periods of time. It's a nice feature to have and a very useful one too.

Color accuracy is also something the 7 should be proud of. The standard Vivid mode returned an average dE2000 of just 3.2, which isn't too shabby. Whites err on the blue-ish side.

The OnePlus 6T already had great battery life but the OnePlus 7 was able to build on that by adding a respectable amount of minutes in the screen on tests. A 3,700 mAh unit may be only average by current standards, but it's all about real life performance and the OnePlus 7 really delivers there. We were pretty impressed by the web browsing and video playback times, but the standby draw was very low too.

It all adds up to a total score of 102h easily overtaking some high-end flagships. Interestingly, though, it's still not enough to dethrone the Asus Zenfone 6 in this price segment, which scored a whopping 112h.

Aside from the great battery life, the OnePlus 7 also has a fast battery charging using the proprietary OnePlus wall charger and USB-A to USB-C cable capping at 20W. A 30-minute charging session got us from a dead battery to 55% - just like last year's OnePlus 6T. The 20W charging standard is no longer the fastest around, but it's still up there, particularly in this price segment. Our battery tests were automated thanks to SmartViser, using its viSerDevice app. The endurance rating above denotes how long a single battery charge will last you if you use the OnePlus 7 for an hour each of telephony, web browsing, and video playback daily. We've established this usage pattern so that our battery results are comparable across devices in the most common day-to-day tasks. The battery testing procedure is described in detail in case you're interested in the nitty-gritty. You can check out our complete battery test table, where you can see how all of the smartphones we've tested will compare under your own typical use.

OnePlus has finally added a second speaker to its phones, although it's the more space-efficient hybrid systems, where the earpiece doubles as one and you get a downwards-facing second speaker. Still the different direction along with the fact that the dedicated loudspeaker is somewhat more powerful makes them sound roughly equal.

They deliver very good loudness and reasonably rich sound although vocals get lost with some tracks. Still, as far as smartphone speakers go the OnePlus 7 has it better than most.

An important thing to mention before we begin here is that the OnePlus 7 doesn't ship with a USB-C to 3.5mm audio adapter in the box. So to complete the test we used a passive adapter we had laying around. This means the results are only going to be representative if you also purchase a passive adapter - an active adapter or headphones with built-in DAC would yield a different result. With that out of the way let's see how the OnePlus 7 did.

The phone posted perfect scores for clarity with an active external amplifier and was very close to perfect with headphones too. The only reading to be damaged was stereo crosstalk and that too took a far smaller hit compared to most phones out there.

Volume levels on the OnePlus 7 weren't quite so impressive - with the phone being below average in both parts of the test. This might prove problematic if you need to drive high-impedance headphones to high loudness, or not matter at all if that's not your use case.