The OnePlus 7T Pro packs the same screen as the 7 Pro. It is a 6.67" Fluid AMOLED with rounded corners and extended 1440p resolution. It is a notch-free panel, protected by a Gorilla Glass 6 piece, and OnePlus offers an additional screen protector out of the box. 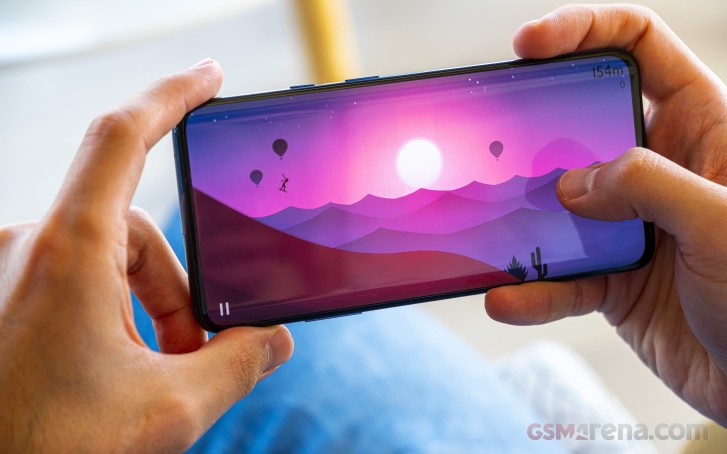 Currently, most of the smartphone makers are still shipping devices with 60Hz displays, with Asus and Google being the exceptions, and this means users can enjoy content (be it a video or a game) at a max framerate of 60 frames per second. OnePlus 7 Pro was among the first to offer a 90Hz display to the masses, and now it is on the 7T Pro as well.

While this doesn't mean 90 fps content will be more prevalent, it does make the well-optimized Oxygen OS experience even better with the added smoothness to transitions throughout the phone. Every scroll and swipe will feel buttery smooth, and once you experience this, it is hard to go back to 60Hz.

The 90fps support should offer a superior gaming experience for mobile games, previously impossible smoothness while scrolling pages and text, and, probably the most noticeable - the amazingly smooth Oxygen OS.

You can switch between 60Hz and 90Hz refresh rates from settings, but there is also a content-based auto switch for when the screen is set on 90Hz, just like on the new Pixel 4 series.

The display maxes out at 430 nits of brightness when adjusted manually, and when set to the Adaptive setting and faced with bright light, it will go as high as 600 nits. We've certainly seen brighter displays on other flagships, particularly from Samsung and Apple. This translates into average sunlight legibility when exposed to a brightly lit day. It isn't the greatest, but it is still plenty visible.

The screen is tuned to comply with the DCI-P3 (Vivid) and sRGB (Natural) color spaces. The Vivid calibration has a more pleasant and saturated appearance while Natural is tuned closer to accurate colors.

Color accuracy is quite good as well. The Vivid profile is not too saturated; Color is just punchy enough but not overwhelming. As usually is the case with a more pumped up profile, whites lean slightly to blue (cool white). In this mode, we measured an average color deviation of deltaE 3.3 and a maximum deviation of 5.1 at gray color.

The Natural profile does yield significantly better color accuracy scores: it's got an average deltaE of 1.6 and a max deltaE of 3.6, which makes it perfectly accurate in our books.

The OnePlus 7T Pro is powered by a large 4,085 mAh battery - that's some "whooping" 85mAh more than the 7 Pro's cell. We believe it is technically the same capacity battery just rated for its maximum capacity instead of the typical rating.

The OnePlus 7T phones have support for an improved fast charging called Warp Charge 30T. It is still 30W charging, and even the charger is the same 30W adapter from the OnePlus 7 - meaning there is no change in hardware. Instead, OnePlus has made some improvements on its charging process, and now the 7T devices recharge faster because they can keep fast charging longer than series 7 before they lower the current.

And so, the OnePlus 7T Pro charger replenishes 60% of its depleted battery in 30 mins, while a full charge requires 69 minutes! The OnePlus 7 Pro needed 85 minutes for a full charge, meaning the maker has indeed improved the charging process in a meaningful enough way. Even if you don't care about about the time a full charge from 0 to 100% would take, you would still appreciate the fact that you be able to top up a half-empty battery faster than before.

Of course, we completed the OnePlus 7T Pro battery test, and it did splendidly. The Pro can last nearly a day and a half on a call, you can watch videos for more than 18 hours no matter the refresh rate, and the web browsing times turned out spectacular, too! 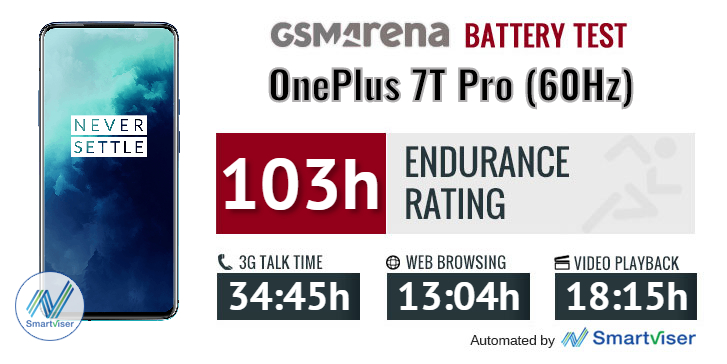 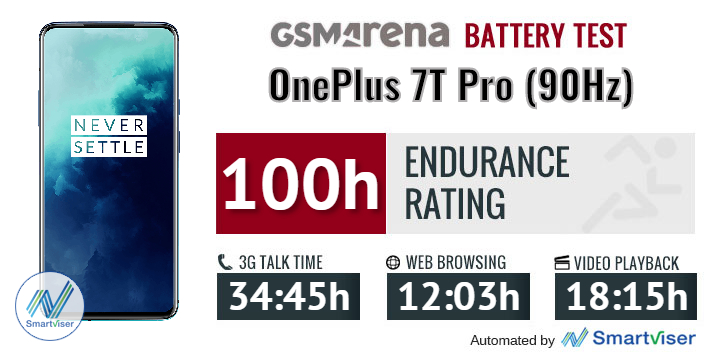 Our battery tests were automated thanks to SmartViser, using its viSerDevice app. The endurance rating above denotes how long a single battery charge will last you if you use the OnePlus 7T Pro for an hour each of telephony, web browsing, and video playback daily. We've established this usage pattern so that our battery results are comparable across devices in the most common day-to-day tasks. The battery testing procedure is described in detail in case you're interested in the nitty-gritty. You can check out our complete battery test table, where you can see how all of the smartphones we've tested will compare under your own typical use.

The OnePlus 7T Pro features stereo speakers - the first is one with the earpiece, while the second speaker is at the bottom of the phone. The maker made improvements since the 7 Pro - both speakers are now larger and louder.

The 7T Pro scored an Excellent mark at our loudness test and impressed us with balanced and rich output across the board. The earpiece's bass is no match to the low notes coming from the bottom speaker, but other than that - we are left with nothing but overwhelmingly positive impressions from the speaker setup on the 7T Pro.

The OnePlus 7T Pro's audio output impressed us with its accuracy in both parts of the test. The readings were perfect with an active external amplifier, and the headphones had minimal impact on any of them.

Strangely enough, the loudness was below par in both parts of the test. While the 7 Pro was among the louder phones around, the T version is actually below average in both tests. We'd imagine that was done in software as it's unlikely that the two have any differences in hardware whatsoever.

We have to note that since our 7T Pro unit didn't have a USB-C to 3.5mm adapter, we used a passive adapter we had lying around. If you get an active adapter, the results won't be representative because they will very much depend on the DAC in the adapter.