The vanilla OnePlus 8's display might lack some of the features the Pro offers, but that doesn't make the display any less impressive. In fact, this could very well be one of the best screens we've seen in this class. It has an adequate 1080 x 2400px resolution adding up to a tall 20:9 aspect ratio, and it's an OLED panel. OnePlus calls it Fluid AMOLED because it has curves to the sides and because it supports 90Hz refresh rate. The latter has become a standard nowadays, but the panel itself isn't very different compared to the 7 Pro and 7T Pro. The curves look identical. Except for the punch-hole camera and the resolution, of course. 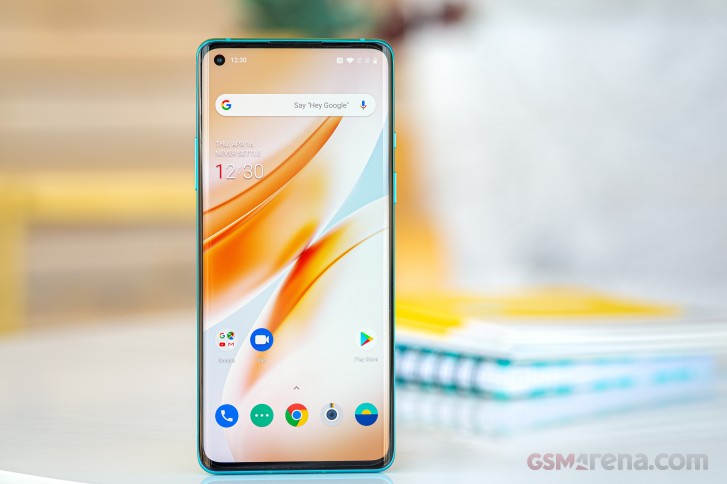 So what makes this display inferior to the one in the 8 Pro? For once, it caps at 90Hz instead of 120Hz, it doesn't have the MEMC (Motion Estimation, Motion Compensation) feature, has 8-bit color depth instead of 10-bit and has no adaptive display tone with the help of an RGB sensor. The 8 Pro's display is also said to be considerably brighter too. 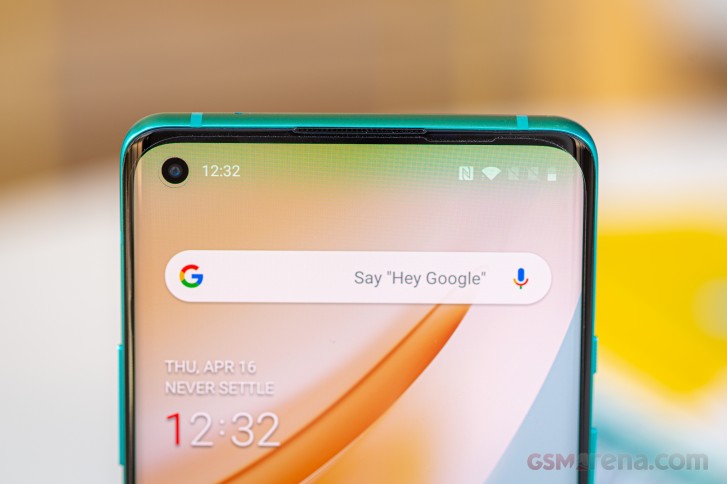 To be honest, though, you shouldn't feel bad about not having MEMC as it's a notorious gimmick used by TV manufactures. You will only be getting fuzzy visuals when watching 30fps video adapted to 90 or 120Hz display. However, the other advantages of the 8 Pro do seem pretty compelling.

In any case, our tests show exceptional peak brightness at 802 nits and 496 nits in manual mode. As far as color accuracy goes, the Display settings menu offers a couple of modes and a customizable preset as well. With the default Vivid mode, you get a rather good 3.6 average dE2000 with blue-ish whites and punchy reds, greens, and yellows. But color accuracy is your thing, you can use the natural mode, which achieves an impressively low 1.2 average dE2000 and 1.8 maximum dE2000.

The battery life on the OnePlus 8 is surprisingly good. We say surprisingly because even with the external Snapdragon X55 4G+5G modem, the phone managed to score excellent standby runtimes. The on-screen results were also quite impressive, and what we found more interesting is that there was virtually no difference between the 90Hz and 60Hz screen modes. The discrepancy ranged between several minutes and its due to statistical error more than anything. So the jump to a 4,300 mAh battery is more than welcome and has improved the overall endurance by a lot. 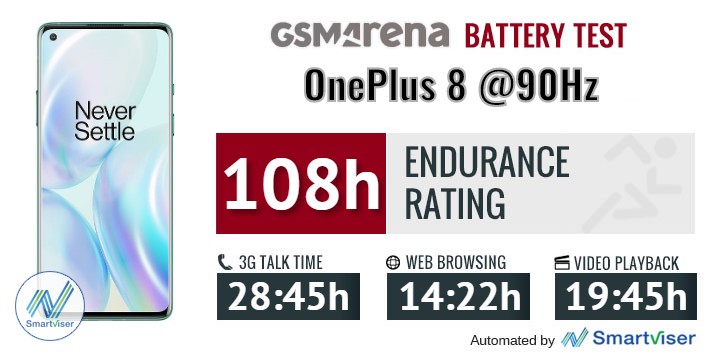 The charging speed has also been largely improved as it tops up faster than the 7 Pro and 7T Pro with the same 30W charger while holding a bigger battery. For the first 30 minutes, you can expect the battery to reach 69%, and leaving it for another 23 minutes will top off the battery completely. We suspect that OnePlus has messed with the charging curve a little. And we noticed that it gets a bit warm if you leave the phone on the charger for long. Then again, this shouldn't be an issue in most cases as the idea of fast charging is to leave the phone on the charger for 20 or so minutes to replenish some juice.

The OnePlus 8 is equipped with stereo loudspeakers - one of them is bottom-facing while the other doubles as an earpiece sitting behind the tiny bezel on the top. They both get really loud, even a little louder than the 7 Pro, but more importantly, the vanilla 8 shows some improvement in the quality aspect as well. Vocals don't sound muffled, while the bass is quite impressive for speakers of this size. The music sounds lively overall, and the highs are punchy. The balance between the two speakers is also good. You can take a look at the graph below - it shows excellent performance across almost all frequencies.