This year OnePlus is expected to launch three new models at once, a first in its relatively short history. The middle child, the OnePlus 8, has already scored a certification from the Bureau of Indian Standards (BIS) while its bigger sibling, the OnePlus 8 Pro, ran Geekbench.

The OnePlus 8 seems to carry a model number IN2011. Like the Pro, it will feature a quad-camera setup on its back. Here are renders of the three phones:

The OnePlus 8 Pro, aka IN2023, has an entry in the Geekbench 4 database. As the hardware and software are still in the early stages, we won’t focus on the result, but note that the phone ran Android 10 on a Snapdragon 865 chipset (“Kona”) with 12GB of RAM. 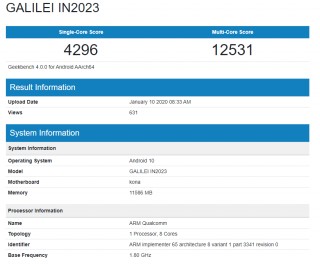 Yesterday, OnePlus unveiled its new 120Hz OLED display, which will likely be exclusive to the Pro, the other two should have 90Hz screens.

The OnePlus 8 Lite will have three cameras and may be the company's first phone not to use a Qualcomm chipset – a MediaTek Dimensity 800 5G chipset is the name that gets thrown around in the rumor mill (the 1000 is also a possibility).

Is there any wireless charging options in 1+ 8 series,