A month ago we saw the OnePlus 8 Pro – model number IN2023 – go through Geekbench. Now a second device, IN2025, has done the same and this may be the vanilla OnePlus 8. 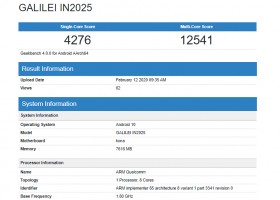 It’s powered by the same Snapdragon 865 chipset (“kona”) and the score it posted is essentially the same. But notice the RAM – it’s 8GB while the Pro model packed 12GB. That’s not to say that the vanilla model won’t have an option for 12GB, maybe we just haven’t seen it yet.

The real question is whether OnePlus will reserve the 120Hz screen for the Pro model, leaving the OnePlus 8 at 90Hz, or if both models will use the new panel. We’re also hearing that there will be a new 50W charger (Warp Charge 50). The OnePlus 8 and 8 Pro may be announced in late March or April instead of the usual reveal in May.

Its definitely worth the upgrade seeing as you can sell your phone for around 200-300$ easily, the OnePlus 7 pro is just an amazingly premium phone for the price point and it just does everything that the A50 or A70 does at a better performance, onto...

It is anyway built to hold around 2-3 years and not 6-8 years like computers, so "future" is a very short time in "future proof".