OnePlus 9 Pro will have a charger in the box, video teaser reveals camera island design

Earlier today, OnePlus announced the date of its announcement of its next flagship smartphones, the 9 series, and that's March 23. The company also made its partnership with Hasselblad official, and a few hours later we have the first official teaser of the OnePlus 9 Pro posted on Twitter by OnePlus itself. You can see it below, the money shot is at the end when we catch a glimpse of what is essentially the top half of the back of the 9 Pro.

It all begins with a simple thought. Discover the #OnePlus9Series, co-developed with Hasselblad, on March 23.

And would you look at that, the leaks were accurate yet again, as this looks exactly like some of the leaked shots portrayed it. There are four cameras there, and a prominent Hasselblad logo.

OnePlus CEO Pete Lau has also confirmed, in both English and Chinese, that the company's upcoming phones will ship with a charger in the box, of the ultra-fast Warp variety. That's somewhat of a relief in this day and age when other manufacturers are starting to forego chargers. 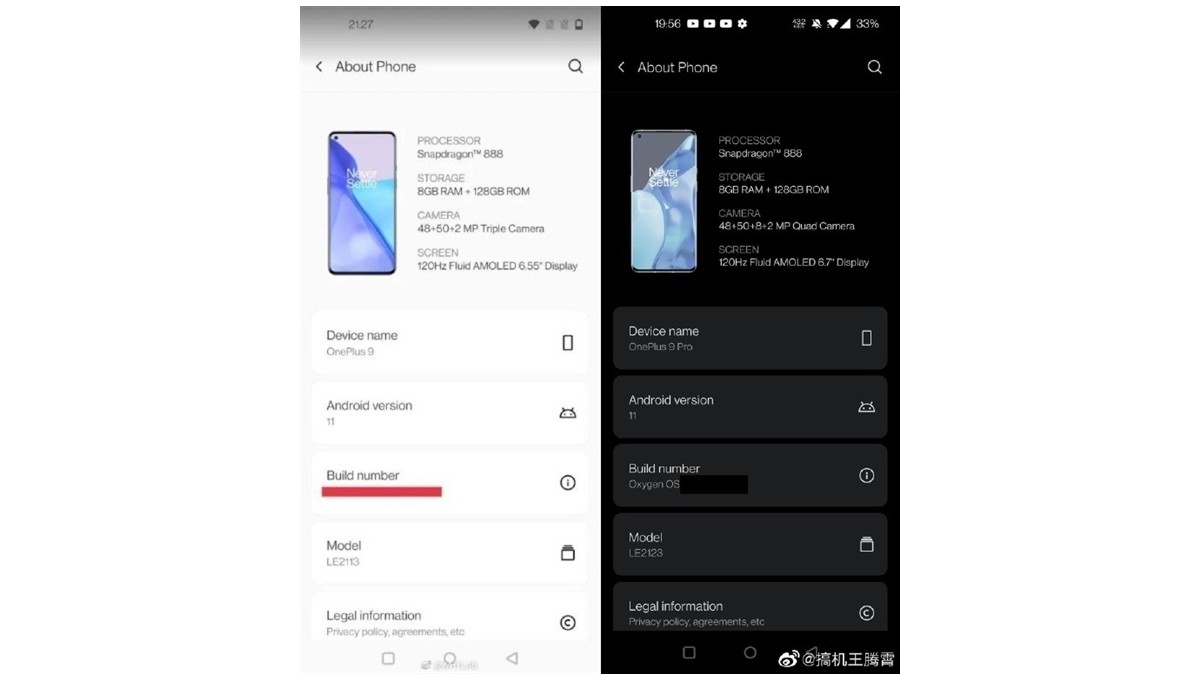 According to leaked images purportedly showing the About screens of both the OnePlus 9 (left above) and the OnePlus 9 Pro (right above), the former will have a triple camera system and the latter will have a quad-camera system, the only difference seems to be the presence of an 8 MP telephoto snapper on the Pro. That 2 MP shooter is probably just a depth sensor.

Otherwise, as expected both phones are powered by the Snapdragon 888 chipset, and have 8GB of RAM alongside with 128GB of storage, and 120 Hz Fluid AMOLED displays, although the 9's is 6.55" while the Pro's is 6.7". The devices will run Android 11 with OxygenOS on top, and the model numbers are apparently LE2113 for the 9 and LE2123 for the Pro. Battery capacity might be 4,500 mAh for both, with 65W charging.

Lol your really sad to hear. If you say Chinese brands not are innovative in mobile business you live in a cave. They are the most innovative country last couple years, whatever you and I want it to be true... So don't spread lies.

OnePlus should seriously consider selling both 256GB and 512GB phones, and remove the 128GB option. Either this, or at least enable SD card slot option with support of up to 512GB memory cards. Their phones are damn solid good, but my only letdown is...