OnePlus is going to launch a new “smarter TV” on July 2, company founder announced yesterday. The company confirmed it will be cheaper than its first TV and we suspected a smaller diagonal could be part of how they achieved it and today we got a confirmation. OnePlus has received certifications for two new models named 32HA0A00 and 43FA0A00, which is clearly an indication of their sizes - 32” and 43”.

At the same time, Amazon India posted a landing page for the upcoming launch and the following sale, revealing prices will be starting from INR1X,999. Even in the worst-case scenario, this is INR19,999 or about $265.

OnePlus is a brand of BBK Electronics, one of the biggest technology conglomerates in China. As such it's a sister brand to Realme. Seeing how the Realme TV arrived in India in 32” and 43” sizes, it is easy to assume a lot of the hardware will be shared. 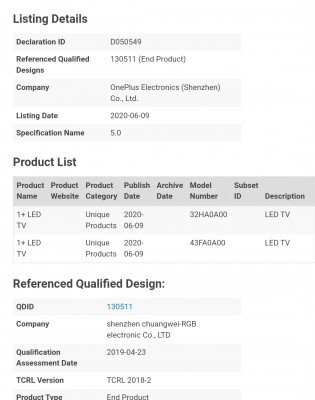 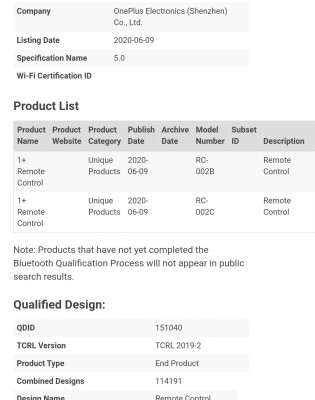 Bluetooth certification for OnePlus TV and One Plus Remote Control

However, OnePlus products typically sit higher up the price ladder, so we may see the OnePlus TV with more premium features. At the rates these teasers are going, we'll probably know more in the next few days.

The features and the specs are pretty promising and neat and seems capable of providing a durable and efficient user experience.

I think that the 32 inch and the 43 inch will be good options for users with a budget.

Price of 43"is bit on higher side.