OnePlus is giving away 10,000 purchase invites for the One

The immensely popular One flagship from OnePlus has generated quite a lot of hype not just before but after its release. Thanks to is robust specs sheet at a very competitive off-contract price the smartphone has become quite the hit. It's become so popular, in fact, that the company has had a hard time fulfilling orders. Until now.

OnePlus has just announced a new competition that'll give away 10,000 purchase invites to potential OnePlus One buyers. 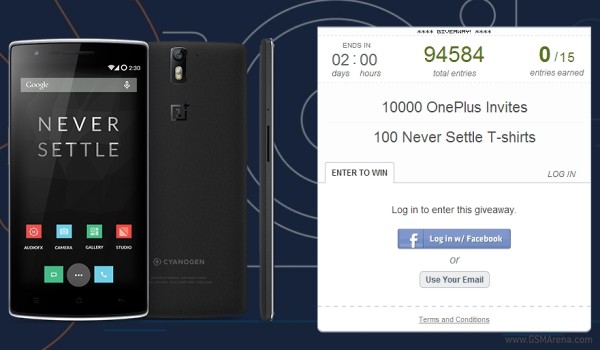 To enter, simply post your summer photos with the hashtags #summershots and #oneplus on Instagram, and you'll be entered to win one of the invites.

The contest is set to last over the next two days, and will end on August 25 at 11:00 GMT. The 10,000 invite winners will be selected at random and will be contacted on August 27. Furthermore, 100 additional entries will receive a Never Settle T-shirt.

If you've been dying to get your hands on a OnePlus One, now's the perfect time to give it a shot. Head over to the official entry page for more information.

Thanks, Kavish, for the tip!

Using nokia!!and want to purchase for a change

Does one plus one phone has heat problems? Did anybody know about this..

Recently I was lucky enough to get an invite, and decided to upgrade from my Nexus 5. I couldn't be more pleased with the hardware, and am in love with cyanogenmod's version of Android. And the price is absolutely unbeatable...