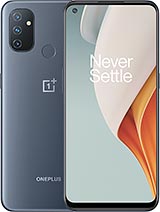 The only missing thing is SD662. Come on, OnePlus. Don't make another Realme C17. You know how to make hype.

For the price I think this is a good phone, it looks and feels high quality. Performs well with all the core features like battery life, signal strength and call quality. I'm especially pleased that it handles dual-sim with different networks without any issues.

Gamers would probably be disappointed by performance, personally though I don't play games on mobiles. If I did, I would just use a streaming service like Stadia or GeForce Now instead.

There are many phones with similar price and specs on the market. What made me choose the OnePlus was mainly their subtle and classy branding, and that they don't add much bloatware on the phones.

I bought this phone to tide me over until smaller screens get back in style again, the phone is a bit too large for me with the 6.52" screen. I prefer smaller phones with screens around 5.5" that are easier to fit in a pocket and type on with one hand.

Anonymous, 23 Nov 2020Poco has ads implemented in it and the launcher is really bad as good as the specs lookI willingly use the Poco Launcher installed on my phone. I liked it more than the others.

Pattern, 24 Nov 2020Hi all, I am probably the sort of user this phone is aimed at, I don’t play games on my m... moreyes then this phone enough etc...

Hi all,
I am probably the sort of user this phone is aimed at, I don’t play games on my mobile, I actually use it to make telephone calls, & I don’t really need a over the top camera as I have a digital reflex with lenses for that…
My actual phone has 2GB ram & 16gb of memory & is 5 years old, it still pretty much does all I need, except now the on off button has broken.
What annoyed me about my actual phone is the quantity of malware that came with it at the OS level & is impossible ( for me) to get rid of…. thanks China….
What I like about this Nord N100 is its OS, it seems clean. Also as an added bonus it has opened up its software & with a bit of luck there will be open source Rom for the N100 after Oneplus stops updating it.
I don’t see a problem with Oneplus creating a low cost line of phones, though they might have to update them selves as to what “Lowcost” actually means, I recon about 150€ for this would be on target (25% less than now) ….
There is a huge market for lowcost phones & there is no reason why Oneplus shouldn’t try to take a slice of it, They have a good base for it, their OS, but I am not sure that they fully understand the constraints of the low cost market, this phone is overpriced, & their best selling point is their OS, limiting updates is a mistake, they take away one of the best reasons for buying. If Nokia can update, OnePlus should be able to.

For those who claim that “Most low cost consumers don’t have a clue about Specs”, that is not entirely true, I appreciate the differences between the phones, I simply don’t believe I need a 1000 € phone & I know I will never use more than what the N100 offers.

Anonymous, 22 Nov 2020For 200 euros in Europe it's a very bad deal. People can just buy poco x3 nfc which is be... morePoco has ads implemented in it and the launcher is really bad as good as the specs look

NeonHD, 22 Nov 2020"Don't throw your mouth on something that you never used. Think first before speak ... moreHe's just a fanboy who just bought a 720p display smartphone and couldn't accept that 720p display is a horrendous, he will move on eventually.

For 200 euros in Europe it's a very bad deal. People can just buy poco x3 nfc which is better in every aspect for 25 more euros or redmi note 9 pro for the same or a little less money.

They should have used a regular 60hz screen and sold it for ~125 euros. Regardless if this cpu can or can't mantain 90fps constantly, it's still stupid to waste the budget on that instead on a stronger cpu or more ram.
With these features it seems to be a silly attempt to trick consumers with less knowedge on smartphones to buy it.

Why use 3 garbage cameras instead of a single decent one? Why use a random 90hz screen that is just 720p on such a large screen size? The more complicated things such as processor and ram are obviously compromised as the average consumer can't tell if they are good or bad.

The software is also compromised since it's launch. It comes with android 10 which is already behind with just 1 promised update to 11 which is the current version. So practically it won't receive any updates all all.

The big battery seems geniunely good, just as on nearly all phones nowadays. It's still nice to see that they didn't mess this up at least.

Overall this device doesn't feel like a oneplus at all. Until recently the brand represented the best value devices, now they have converted to overpriced generic low quality phones. The screens on the 8 series were also mass flawed since they used cheap oleds. I won't be surprised if the N100 also has hardware flaws that will be discovered later on.

Meanwhile two other people above disagreed with you. Seems like you are the one who needs to think first LOL.

And now after its been released and it ships with 90hz display no one is complaining. Btw the build quality is much better then any redmi, vivo, oppo or any other china brand 👍
Specs for money i would rate it 7/10
Build quality 9/10 (even If its plastic back)
Overall experience 8/10

3.5mm and micro sd on a oneplus. Nice

QUALCOM SD460?? Oneplus , have some respect for your fans!

13abySouL-, 19 Nov 2020720p is fine on 6.5" screen Have you ever use it ? Don't throw your mouth on som... more720p on 6.5inch display is garbage and bad for eyesight
Have u ever see a 1080p display
I am using 720p 6inh display & i hate it
And its huawei display far better their realme i have seen both even infinix has better diplay then realme

I ordered N100 on 11th of November and it arrived 3 days ago. Tried out everything on it. Performance for 200€ phone is outstanding and screen isn’t so bad. I mean you can see pixels if your nose is next to it, but its not noticable at reasonable distance. Battery is great, speakers lack deepness/low notes. I’d give it 8/10. If you are thinking about buying this phone then I promise, it’ll not dissapoint you.

Have you ever use it ?
Don't throw your mouth on something that you never used.
Think first before speak out.

PS people who say for for Nokia go for Snapdragon 665. You now I used the Nokia 5.3 with Snapdragon 665 it lagged so hard even on the most simple task as Facebook messenger. Nokia don't care about optimized system they just make it look clean then everything lags hard instead. Also the 460 is almost exactly the same processor it's so close you would not be able to tell much difference between them. So please use phones before posting trash about them. I do not recommend Nokia anymore if you have access to oppo or vivo please buy if you really think you get more.