OnePlus One gets a Snapdragon 801 upgrade

OnePlus, a startup phone manufacturer composed by former Oppo employees, has been trying its best to bring the spotlight on its upcoming One flagship smartphone. The latest teaser from the company reveals some of the hardware specs of the OnePlus One. 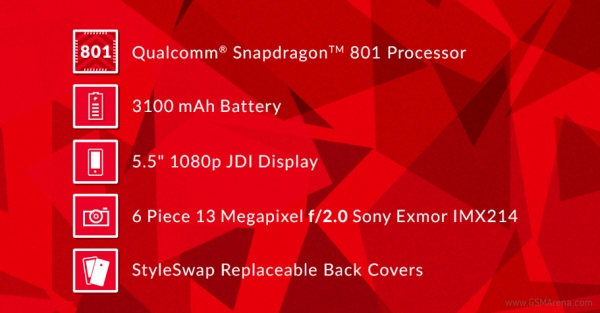 The OnePlus One is officially confirmed to sport a 5.5-inch 1080p JDI display and Qualcomm Snapdragon 801 SoC. The handset was tipped to have a Snapdragon 800 processor, but as it turns out, it will be powered by the newer Snapdragon chipset. It has already appeared on AnTuTu and managed to pass the test with flying colors.

OnePlus One will also feature a 6 piece 13 megapixel Sony Exmor camera with f/2.0 apeture. The teaser also reveals that the device will have swappable back cover and 3,100mAh battery underneath it.

The OnePlus One is rumored to come out with an aluminium unibody design and is expected to cost less than $400. However, there is no official confirmation and we will know more about the device when it goes official.

Google Nexus One is also a unibody design, but the backside can be removed. It is about the body structure is crafted out from a single block of aluminium, hence the unibody.