Chinese smartphone manufacturer OnePlus has confirmed that it's upcoming smartphone - the OnePlus 3 - will be unveiled on June 15, which is less than a couple of weeks from now.

The announcement came in the form of a post on Weibo (China's Twitter), where-in the company also revealed that the device will be available for purchase the very next day (i.e., June 16). 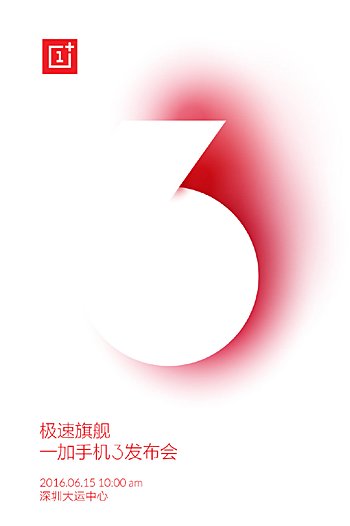 In case you missed, OnePlus has already announced that the OP3 will be released invite-free right from launch day, making it the first OnePlus device that'll be available sans-invite. "In addition, invites are gone forever from future OnePlus product launches," the company said in a recent blog post.

As for specs, from what is known so far, the phone is powered by SD820 SoC, and sports a 5.5-inch 1080p display. RAM is either 4GB or 6GB, while storage is 64GB. A 3,000mAh battery is there to keep the lights on, and the handset also features a fingerprint scanner.

That paltry 3000 mAh battery is the only thing that's swaying me away from buying it.