Yesterday we told you about a new promotional campaign by Microsoft that claims using its Edge browser will make your laptop's battery last much more on a charge than if you go for any competing product such as Google Chrome, Mozilla Firefox, or Opera.

In a video on the matter, the company showed Chrome emptying the test laptop's battery after 4 hours and 19 minutes, Firefox after 5 hours and 9 minutes, Opera after 6 hours and 18 minutes, while Edge made it last 7 hours and 22 minutes. This test involved streaming a video over and over again through each browser.

Today Opera is responding to Microsoft's claims through a blog post. As you might have expected, the team over there is pretty unhappy with the test conducted by its competitor. It counter-claims saying that in its own tests, Opera is easier on battery life than Edge, and by a lot - see the image below, shared by Opera. 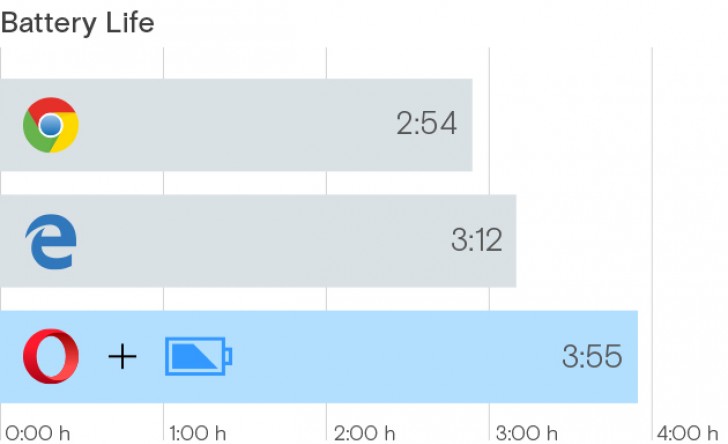 The only thing the two companies seem to wholeheartedly agree on is that Chrome is the absolute worst when it comes to battery life on laptops. However, there are very many caveats to take into account when thinking about Opera's claims.

Thus while Opera is mad at Microsoft, it's responding by using tests performed with an experimental version of its product, one that most consumers aren't likely to use. It also has two optional features enabled, which, again, not many are likely to turn on. On the other hand, at least Opera is very frank about its test methodology (which you can find in full at the Source link below), whereas Microsoft has forgot to say anything about which specific versions of the browsers it had running in its test.

Did they use adblocking on Chrome? Is not Opera based on Chrome?

Edge is completly unusable because it can not even import all my Chrome bookmarks in many folders, and Opera is also unusable because of the way it handles bookmarks, so batterylife... is irrelevant when unusable! Adblock Plus and CyberGhost, both...