Oppo A92s doesn't have a launch date yet, but TENAA already revealed its design and specs. And now, it has appeared in a set of new official images, which leave little to the imagination.

You can see the A92s packs a punch hole display, which according to TENAA measures 6.57" diagonally, has 2400x1080 pixel resolution, and is rumored to have 120Hz refresh rate or touch sampling rate.

On the back, you get four cameras housed inside a rectangular cutout with LED flash in a unique style. 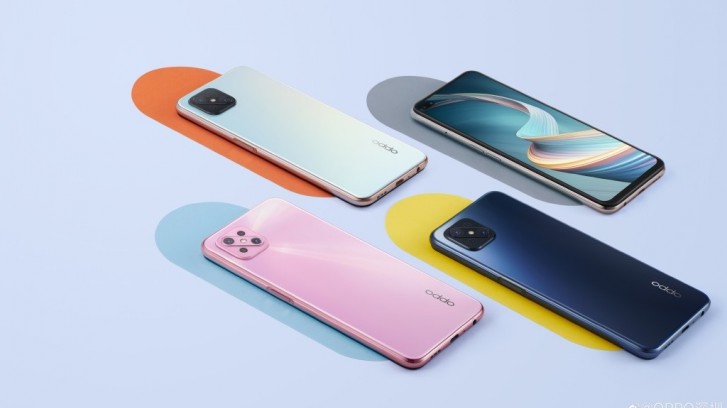 The A92s has the volume rocker and SIM card slot on the left side, while the power button with a fingerprint reader embedded resides on the right.

At the bottom is the USB-C port flanked by the primary microphone, speaker and the 3.5mm headphone jack, and up top is the secondary mic.

The Oppo A92s will run Android 10 out of the box and will be powered by a 2GHz octa-core processor, which could be a part of MediaTek's Dimensity 800 SoC. The smartphone will come with 6GB, 8GB or 12GB RAM, and you'll have two storage options - 128GB and 256GB.

The smartphone will support dual-mode 5G, pack a 3,920 mAh battery, and come in at least three colors.

You can now have under-display Fingerprint for IPS LCD, as demonstrated by Honor in July, 2019 and Xiaomi in December, 2019.

The real significance of this device: It has opened the flood gate for a long list of incoming smartphones based on Dimensity chips.