Oppo is perhaps better known for its Blu-Ray players, but if the Find 5 fails to place it on the map as a phone maker, we don't know what will. The 5" 1080p screen will sure have plenty of eyeballs on it and its 441ppi density will certainly impress most, but the Find 5 has flagship specs almost all the way through - and we mean 2013 flagships. 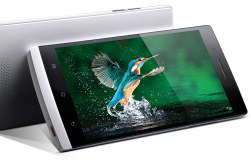 The Oppo Find 5 is one of a series of Android phones we'll see this year to pack a 5" screen of 1080p resolution. Just like them, it has a powerful quad-core processor and a robust GPU - and neither is this a whim but a necessity (every frame on the screen has more than double the number of pixels of a 720p screen).

Oppo has taken a page from the Sony playbook and equipped the Find 5 with a 13MP camera capable of HDR video. The camera also jumps on the HFR bandwagon with a 120fps mode (though only at VGA resolution).

The Find 5 is certainly an ambitious project and on paper it's pretty well executed - there's skill and character aplenty, though not without a few issues.

The missing LTE is not quite the deal-breaker just yet, but it's a part of the future-proofing of a 2013 flagship. Non-expandable storage is another issue for a phone boasting a massive Full-HD screen and Dolby Mobile. If you get the 16GB version, you risk running short and quite quickly at that.

On the up side, Oppo has done a very good job of the design - the Find 5 looks like it belongs to the Xperia NXT line (we mean that in a good way) and the steel frame gives the phone a sturdy feel. It is fairly thin at 8.9mm and the curved back makes it feel thinner still. It's got proper battery backup too - 2,500mAh is more than what many direct rivals typically have.

Oppo Find 5 at our office

It may have come out of left field, but the Oppo Find 5 looks quite the player. Head over to the next page where the new signing is in for a physical.