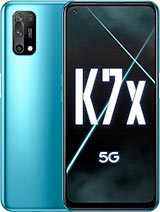 FeederEater, 08 Dec 2020In short, i couldnt care less about u thinking that i am fanboying. Apparently the truth and k... moreBro, I just looked through the posts, you are 100% biased towards LG, come on dude. Maybe this so called "Knowledge" of yours is extremely biased, but I know that everything you were arguing about is bullshit. I do not believe that you are a fanboy, I just believe you are misinformed, so please, let us teach you.

I just got the Oppo K7x for 1999 RMB, But unlike the described above it has 8GB Ram and 256GB internal storage and also has an SD slot so whoever made this description needs to update it as it has other options than the one described at least in China that is. To the one asking if play store can be added to it YES I installed all my google services onto this phone.
It is a great device so far especially for the price.

6sxred, 27 Nov 2020TL;DR. You like to talk a lot, and from the last time I spared some of my time to read your e... moreIn short, i couldnt care less about u thinking that i am fanboying. Apparently the truth and knowledge is out of grasp of many people. But dont worry, you will one day be able to see and feel it, you just need some time. Here in short, since it seems like "books" are worthless for u coz they are long, then read the titles :)

FeederEater, 16 Nov 2020Fanboyism? LOL Apparently people that have a lot of knowledge on things are now fanboys, imagi... moreTL;DR.
You like to talk a lot, and from the last time I spared some of my time to read your essays, it's always full of bullshit and most of it is based on your ridiculously biased view because you're delusionally infallible, and I don't have the time nor the energy for that. Hold on to your opinion that LG is reigning the world, that will definitely make your life better. Have a nice day & see you never.

6sxred, 09 Nov 20201- I have an LG G8 ThinQ so your very first sentence is already false. 2- What tf does “for... moreFanboyism? LOL Apparently people that have a lot of knowledge on things are now fanboys, imagine. Maybe if u based ur opinion off MORE than 1 device of of any company i would take you seriously. If u are not happy with ur G8X, feel free to send it my way :)
Even tho i love LG phones, i have recommended many phones to friends and family, far and wide, probably hundreds of phones, and i havent recommended even a single LG phone. Not bcs LG phones are bad, but BCS i am aware of reality, and people are aware of me loving LG phones. I would never recommend someone what i love and what suits me, but what they told me are their needs. You are free to think of their hardware as "mediocre", but apparently the only people saying anything bad about LG hardware are MKBHD and likes, and yes, they are payed well to promote Samsung and Apple, they dont care about companies such as LG :)
Every other big and small YouTuber that has actually tested tens of LG phones and all others, are the ones talking properly about them, saying whats bad and whats good.
Apparently u were arsed enough so you didnt read my whole comment, where i spoke what was 2-3 years back. To your knowledge, LG didnt die in 2013, its still very alive. LG was still in race with the biggest and best from others until a year ago, just coz they didnt release their true flagship yet this year, doesnt mean that they are dead. And if, as per you, LG died in 2013, then i wonder what were LG G3, G4, V10, V20, V30, G7, V40, G8, V60 and Wing, and yes, i purposely left out some devices that even i consider were not worthy of a flagship name. You said u own G8X, well, G8X was literally a slightly downgraded LG G8, not sure if u were aware of that. Oh, and just as a reminder, my "very first sentence" was not false, i said "when u try a few of them", and u argumented with "I have an LG G8 ThinQ so your very first sentence is already false". Not sure does 1 phone sound/mean "a few" to you, but u lost me there already ^^
Like i said, until u own a few of them, u pretty much dont have much right to opinion on them, at least not on LG as a company. U can opinion on G8X, and feel free to do so, coz that would make perfect sense. But u opinioning on a whole company coz of 1 product u *bought* doesnt work. Not just with LG, but it doesnt work with anything, with phones, cars, home appliances etc. Especially dont go throwing around some random years and thinking of argumenting with that against someone who actually knows what LG released in 2013. and years after, people might laugh at you.
No offense and no ill will towards you. Have a good day

Electro, 13 Nov 2020Still not available in indian market.It just came out... like two days ago, and youre staying "still". This phone might be sold in China only.

Still not available in indian market.

Anonymous, 11 Nov 2020Yes, it is not a Huawei phone. Huawei is the only company without Google. Thank you

B4425, 10 Nov 2020Can I download Google Play on this?Yes, it is not a Huawei phone. Huawei is the only company without Google.

Nice phone. The features are a give away for the price.

Zayn, 09 Nov 2020Why tf is everybody talking about Lg this is an oppo phoneI know right

FeederEater, 07 Nov 2020Maybe one day when u try a few of them u will be able to opinion on them :). Noone is denying ... more1- I have an LG G8 ThinQ so your very first sentence is already false.

2- What tf does “forcing” me or any other customer have to do with the prices? LG's phones are insanely overpriced and absolutely mediocre to say the least.

3- Your fanboism won't make LG any better. They sell mediocre hardware for high prices, which means they are a bunch of greedy fraudsters by definition. If they're selling a 200€ phone for double or even triple the price in LG's particular case, then they're scamming people.

4- Keep your “history” lessons to yourself and try to work on them more, because LG died in 2013 and the other chinese manufacturers like Xiaomi started shining during that exact time. And just in case you didn't know, we're in 2020 so whatever LG did 7 years ago, it is completely irrelevant now.

5- LG phones are not cheap to fix at all because their parts are rare, due to LG's horrible policy and the incredibly low number of certified service centers they have isn't making things any better to the point where repairing a 3 years old S7 would cost less than fixing my 2019 LG G8. Also, as much as I doubt that you're an actual technician, your data is relative to your region. If you fix LG phones for cheap in your area, that's good. But that's not the case everywhere in the world.

6- Literally all you said is nothing but a personal bias towards LG, and you keep referring to yourself as your own source of info. Why would I deny every single statistic that shows the domination of those companies that you seem to have an irrational fear of their success and all the reviews from end users and youtubers from all around the world just to believe you? What in the world makes you reliable? What makes you any more trustworthy than the GSM Arena staff themselves that review and recommend multiple phones from those exact same brands that your heighness “have tried and considered them not durable enough”?

6sxred, 06 Nov 2020LG are more than just greedy. They're on Apple's level when it comes to selling smar... moreMaybe one day when u try a few of them u will be able to opinion on them :). Noone is denying that CURRENTLY LG has low end phones that are overpriced. I spoke of all LG phones in past 8 years. They are not greedy. You know that greed works only if those phones sell, right, and u dont have to buy them if u dont want to, coz noone is forcing you? They have their reasons for pricing those phones like they are. But just coz of a generation or two of low end and mid rangers, you are telling me that they are worthless and greedy? Say that for "Scamsung" and Huawei that started thinking they are Gods 4 and 5 years ago, and started pricing their phones as high as Apple, and not just flagships but every single phone they offer, their parts costing a fortune to replace, unlike LG and Chinese companies (i know coz i repair phones). Unlike those companies, LG was in dump and has been trying to crawl out of it, they are fighting the way they see fit for it. My opinion and point of view is unchanged, like in the earlier message, like in this one. LG phones have always been cheaper than their competitors, until Chinese companies took over 2-3 years ago. LG flagship phones remain cheaper than the only 2 competitors LG has always had, Samsung and Apple. Until 2015. there was only Samsung, Apple and LG, Huawei was nowhere to be seen, and Xiaomi, Oppo, Vivo... werent even known by anyone besides China. After 2015. Huawei joined the race and LG fell. But compared to Oppo and Xiaomi,, LG phones will function longer and properly and wont be slowed by software updates nor get their batteries nerfed over time :) (Talking from experience, owned multiple Xoami's, from flagships to mid and low rangers, while having multiple low and mid range LG's in use by close friends and family, all they had to tell me was words of praise for their phones working for years, but for Xiaomi there was multiple problems of battery performance being nerfed with an update, motherboards going crazy, screens touching itself...), Oppo and Vivo cant be much more different for the same price of Xiaomi, and Xiaomi is by far more superior than the other 2 companies. Non of this means that everyone will have problems or no problems. But one is certain, at my end, spec sheet means nothing, and if paying more will mean having something that will last longer, i will pay no problem.

FeederEater, 05 Nov 2020LG? LG always has by far lower prices than other brands you mentioned. Dont lump them in the s... moreLG are more than just greedy. They're on Apple's level when it comes to selling smartphones. Mediocre hardware with ridiculously high prices.

Let's not forget LG's horrible software support with their "flagship" phones that are barely one year old and still stuck on Android Pie 9.0 and security patches that come every quarter or so.

LG phones are overpriced and a headache to deal with, so what's "worth it" in any of them?

Total of 30 user reviews and opinions for Oppo K7x.
ADVERTISEMENTS