Your images come to life on the 5.9" display

The Gallery in Android 4.3 Jelly Bean retains its ICS looks and functionality. The Default view of the gallery is Albums, the first of which is always the Camera album, which has a camera overlay icon too. Rather than the familiar stacks, the app uses a grid of photos, two on a line.

The single photo view is updated too - above the photo are several sharing shortcuts and a delete button, while the underlying strip of small thumbnails of all other photos in the album isn't available any more.

The settings menu lets you do simple edits to a photo (rotate, crop) or go into a more capable editor with a lot more options. The editor can be accessed via a small icon in the bottom left corner and offers light adjustments (so you can bring out the shadows or the highlights), effects, color styles, red eye correction, straightening a photo, sharpening and face glow (which detects faces automatically). Most of these options have a slider that lets you set the strength of the effect.

The CyanogenMod Oppo N1 comes with a custom made file manager out of the box. It's quite capable and sports a simple interface of a traditional folder browser. Selecting files allows you to delete, rename, copy and view their properties from a pop-up menu.

Batch operations are supported. The folder browser has list and grid views and you can change the sorting method. You can also change the theme of the file browser from the settings menu.

The video player is still not getting the necessary attention from Google and there's no dedicated videos app yet (you have to go through the Gallery). Despite Oppo N1's excellent track record of supported video codecs, the CyanogenMod edition could only handle mp4 videos, while avi, mov, DivX and XviD were out of the question. We'd suggest using a player with a codec pack, like MXPlayer and enjoy videos on the great 5.9" IPS display.

To the phone's credit, compatible videos played up to FullHD resolution trouble-free.

At long last, Google has implemented wireless video sharing with a Wi-Fi enabled TV. The feature relies on the good ol' DLNA technology to connect and the Miracast protocol for streaming. It's another feature most customs launchers had, but is only now making its way to the platform itself.

Google's own music player called Play Music is aboard the CyanogenMod Oppo N1. It went through a major UI overhaul and is now snappier and more beautiful. It features the spanking New Listen Now feature which tries to determine what you like and the sequence of your track-changing so that it can start offering you music you might like to play next.

Google Play Music also gives you the option to upload music onto the Google cloud and stream it on your device via Wi-Fi or mobile data. There's also the nifty option to download the content onto the device if you want to have it there for those occasions when a connection isn't available.

The Settings key will get you into the equalizer. It can be turned on and off and features several presets along with a user defined one. If you plug in a headset, you can also play with the Bass boost and 3D effect sliders.

While the player is working, the lockscreen features the album art and track info for the current song along with playback controls. The notification area also lets you control the playback via an expandable notification.

Cyanogen has also cooked up its own music player dubbed Apollo. It's pretty standard and is reminiscent of the pre-update Google Play Music player. It supports playlists, folder view, and an equalizer.Overall, the Apollo can match the Play Music app's functionality.

The Oppo N1 turned out to be an excellent performer in terms of audio quality. The phablet aced the first part of our test, posting excellent scores and garnishing them with the volume levels comparable to those of the HTC One Max.

There's some drop in quality when you plug in a pair of headphones with distortion and stereo crosstalk both up a bit. It's not too bad though and neither is the drop in volume - the loudness is still above average. We'd still rate the overall performance as excellent. 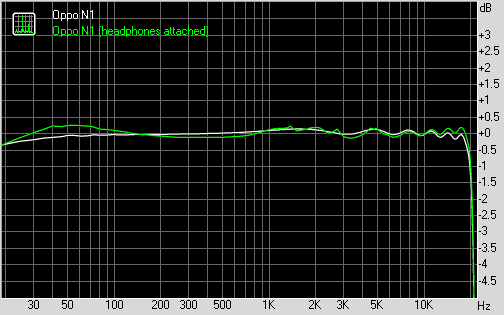