Oppo N3 back panel revealed in an official teaser photo

With the Oppo N3 launch event on October 29 fast approaching, the company is revealing more about what the phone will look like in teaser photos. The latest one, posted on Weibo, shows the phone's back and it does so in detail. 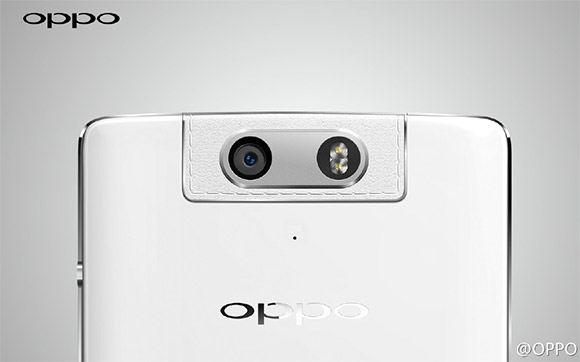 Just like we anticipated, the rotating camera module is still in place but this time seems a lot more stylish. Oppo has given it a faux-leather finish and a single piece of metal in the middle surrounding the camera module and dual LED flash.

The photo confirms the looks of the phone are similar to the three color versions leaked later last week. Oppo will launch the phone in pink, white and cyan and it come in either stainless steel or an aluminum-lithium alloy body.

The rest of the Oppo N3 specifications should include a 5.9" 1080p display and will run on the latest Snapdragon 805 chipset with 3GB of RAM. Just like with the original Oppo N1 the camera will be capable of 206-degree rotation and will feature a 13MP sensor with dual-LED flash.

We also suspect that Oppo will release two versions of the N3 as the first press shots of the phone we received clearly show a different design. October 29 is just a bit over two weeks away, so we'll have to be patient until then.

Pretty large bezel at the top? I hope not.