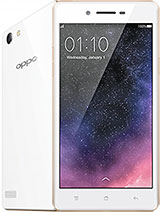 Never buy an oppo phone unless the company makes a changes in the battery backup...In order to prove it I fully charge the phone and left it unattended for 24 hours and surprisingly the phone battery went down to 50%....then imagine it in 48 hours time. If you don't believe me try it....

Anonymous, 04 May 2016i bought this oppo neo7 3 months from now and im so sad because the phone is great camera is g... moreMy dad bought for me as a gift.. Not onlyweek left... It started hanging and the phone started hanging .. Worst phone ever... Dont invest ure money on oppo.

Oppo baba, 02 May 2016Oppo is fourth largest mobile company in the world so what you are writing is not true.It sold... morethis is worst phone I ever seen in my whole life. I bought this phone in last week of January and it starts hanging from 1st week of march. One more thing its battery back up is also very low.

Harish kumar, 02 May 2016Hello guys, This is one of the worst phone I have ever seen from dese oppo bludies.Compared ... moreGood comment

OPPO neo 7 is very good mobile and it's camera clarity is very good and performance is too good, I am satisfied for buying OPPO neo 7

i bought this oppo neo7 3 months from now and im so sad because the phone is great camera is good but why the battery. it cant even last for a day. and its getting hot when its charging it or even using it. i dont have apps that have big ram or anything. and my charger is hot too.oppo you need to fix this.

User of neo 7, 02 May 2016Hey this oppo neo7 is bullshit..I can't even update the system update and the camera don't hav... moreIn three month has given two updates.In latest update it has given anti virus apps.First own it then comment.

i usually not receive the notification but have to open the app for receive messages...help plz

Hey this oppo neo7 is bullshit..I can't even update the system update and the camera don't have color night

Harish kumar, 02 May 2016Hello guys, This is one of the worst phone I have ever seen from dese oppo bludies.Compared ... moreOppo is fourth largest mobile company in the world so what you are writing is not true.It sold 18 million phones in first quarter of 2016, if its phones are ordinary than it could not have sold such number of phones.

someone, 12 Apr 2016im using oppo neo 7 for almost one month and i observe that if i using data connect the batter... moreFor me it only took about 3 hours & sometimes it could be less

Hello guys,
This is one of the worst phone I have ever seen from dese oppo bludies.Compared to dis, ordinary phone is better to buy which doesnt have camera or any other options is good to buy.
MAJOR COMPLAINTS
1. Performance is toooooo worst.to open contact list it Wil take around 20minutes to open even though if we have less applications.
2. Key pad is too worst bit able to use properly

3. Couldn't attend calls many times,swiping option is really too worst
4. And see r so many other issues as well.But please don't buy this phone by investing 10k to dis begger phones.
Instead of this worth going fur other phones.Am really too bad on Oppo company.You guys made outlook good.But while using phones people are suffering a lot.Even u felt d same.I throwed dis phone to dustbin,der s no worthy guys.pls pls donot go fur this.if you want still clarification call My number 9740430695

It is very good mobile.it's camera is very high.so I had bought a oppo camera phone.

Vane, 08 Dec 2015Hi..i just want to ask your opinion guys..im buying a phone this friday and i am torn between ... moreBetter select asus zenfone 2 laser

my oppo neo 7's factory reset wont work. and also, my apps suddenly shuts down and i dont know why. i cant even send pictures and voice messages on messenger. please help me. i want to factory reset this sht.

Its not supporting 4G.

calling is not possible with 4G sim.