Oppo R15 and R15 Plus has its specs leaked on Weibo

Oppo is gearing up to announce the R15, a successor to the R11, a device whose hardware design would later be adopted by the OnePlus 5. The phone has been teased with a notch in its display and an entire TV commercial, complete with the unreleased phone’s name has also been shared around.

A new leak comes from Weibo where the phone’s supposed specs have surfaced. The phone was previously rumored to have MediaTek’s newest Helio P60 CPU. This leak coincides with that rumor since it also mentions the Helio P60. 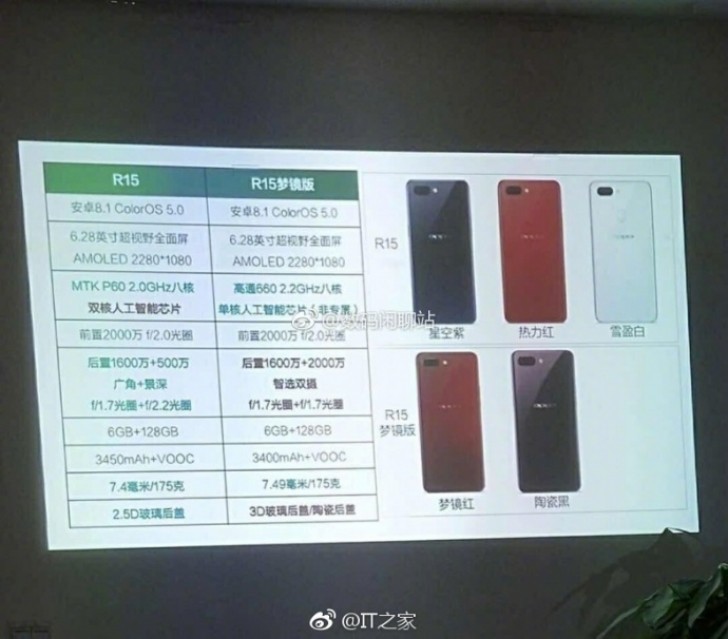 This actually calculates to a 19:9 aspect ratio - well, if you include the darn notch. Our guys at the office are really going to have a field day calculating the screen-to-body percentages for all these upcoming notched phones.

Finally. It looks like the R15 will be available in Black, Red, and White. Meanwhile, the R15 Plus looks to have different finishes on the back. That red is different from the one on the R15, otherwise, the other R15 Plus color looks to be a dark purplish color.

And yeah, because a 5 MP sensor with an f/1.7 aperture was quite an innovation and introduction in the mobile camera tech world we missed in the last x years or so?

Ahh the OnePlus 6 prototype has arrived.