Oppo is gearing up for an action-packed end of March. After the scheduled announcement of the F7 on March 26, the company's now revealed that the R15 is coming by the end of the month too too (likely an R15 Plus as well) - five days later on March 31. 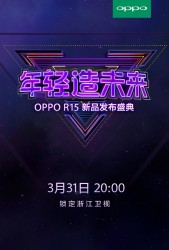 The R15 will be unveiled at a televised event, scheduled to start at 8 p.m. local time. Chinese actor Zhang Yishan will be on board as brand ambassador, for those familiar with the country's sitcom scene.

Meanwhile, details have emerged on the R15's primary camera, only mentioned in a previous specs leak - it will rely on a Sony IMX519 sensor. This has to be the first time we're hearing of this particular model, but Oppo's promo images indicate it's both larger at 1/2.6" and with bigger 1.22-micron pixels, when compared to the R11s' 1/2.8" IMX398 and its 1.12-micron pixels.

It all depends on the company software image processing tweaks. For example Sony Xperia Z1/Z2/Z3 use imx 220 with f/2.0, Huawei P9/Honor 8/8 pro use imx 286 f/2.2...the results is like night and day which Huawei/Honor on the better quality side. Hec...

Well, congratulations to all dumb fruity X wannabes who can not afford the real fruity thing, one more option among a ton of mediocre crappy devices, now, if you are desperate to get a notch(not a phone, just the fruity looking notch) now there is a...