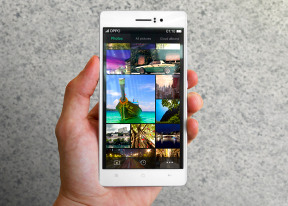 The world's thinnest smartphone record is as fragile as a piece of china. It was broken three times in the last couple of months alone. The Gionee Elife S5.1 was first with a ridiculously slim 5.1mm profile, but its moment of triumph was just that - a moment. The 4.85mm Oppo R5 snatched the prize right out of Gionee's hands but didn't hold on to it long enough either. Out of nowhere, the 4.75mm shadow of a Vivo X5 Max took it home. Though obviously, the record stayed in China the whole time.

Our luck isn't any better - we usually miss the record-holder by mere days. OK, the upside is we can concentrate on the important things. That said, the Oppo R5 may not be the thinnest anymore, but it's pure class - and mind you, it's the second time we meet it in person.

The Oppo R5 is made of hand-polished aluminum alloy with special liquid-metal phase-shifting cooling elements inside taking the heat off the processor cores. Speaking of, there's eight of them on the Snapdragon 615 chipset (four 1.5GHz Cortex-A53 cores and another four at 1GHz) with a new generation Adreno 405 graphics accelerator.

The Oppo R5 packs a 5.2" Super AMOLED screen of 1080p resolution and a 13MP rear camera with fast focus, Ultra HD 50MP option, refocus mode, and improved low-light performance with slow-shutter. You get a 5MP selfie cam as well and LTE is enabled too. The rapid charging mode is here to stay and the charger is even smaller this time around.

Let's take a look at the complete feature list.

A profile so thin comes at a price, of course. The 3.5mm audio jack turned out impossible to accommodate, so the Oppo R5's audio output goes through the microUSB port. Thankfully, Oppo is supplying an adapter, so you can use any 3.5mm headset.

The lack of a microSD slot and the low-capacity battery are tougher ones to swallow though and we'll try and look at how this might affect your overall experience.

Interestingly, the Oppo R5 doesn't come with the promised 4K video recording or the 1080p capture at 60fps. Oppo says those need some further tweaking, but they will be enabled via a software updatelater down the road. Fingers crossed!

But not for long, since that retail box awaits. We're taking the wraps off on the next page. Let's get started.

Why my oppoR5 cellphone did not flash charging???

A phone with worst battery life.. Except the battery, overall phone is awesome.. love this phone.. Please see to the battery..

why not water resistant