After the Oppo N3 cameraphone, the company unveiled its first 64-bit smartphone, which is coincidentally also its thinnest yet. The Oppo R5 measures just 4.85mm thick, the "slimmest phone in the world," Oppo claims. The company has shaved quite a bit of thickness compared to the 6.3mm Oppo R3.

The frame of the phone is made of 3D-welded aluminum alloy. The frame has been hand-polished and measures just 4mm thick. The other measurements are 148.9 x 74.5mm (that's rather tall for a 5.2" device) and the weight is 155g. 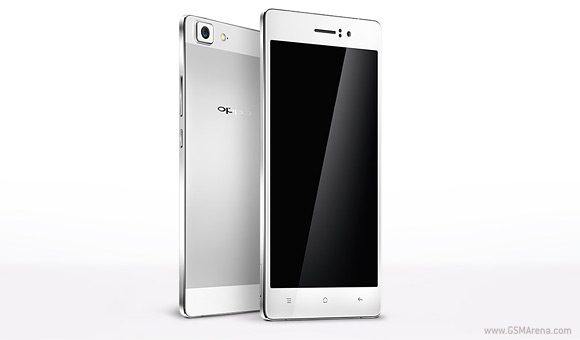 Anyway, the Oppo R5 has a 5.2" AMOLED screen of 1080p resolution (423ppi). The company is promising the best brightness, lowest reflectivity and highly accurate colors.

The R5 will launch with Android 4.4-based Color OS 2.0. It's powered by Snapdragon 615, Qualcomm's mid-range octa-core chipset. It features an octa-core Cortex-A53 processor at 1.5GHz, which is paired with an Adreno 405 GPU and 2GB RAM.

Oppo has created a special cooling element made from liquid-metal and phase-change materials to take heat away from the chipset.

Despite being so thin, the Oppo R5 packs a 2,000mAh Li-Polymer battery, which will be quick to top up thanks to the VOOC mini rapid charge tech support. Connectivity starts off at 2G GPRS and goes up to TDD/FDD LTE. There's also Wi-Fi a/b/g/n, Bluetooth 4.0.

There's one thing missing - a 3.5mm audio jack. We suppose it's because the R5 is so thin, but you either have to use the wireless O-Music accessory for streaming or a microUSB to audio jack adapter (one is included in the retail package).

The Oppo R5 will go on sale for $499 though we don't have an exact launch date yet. But you are welcomed to check our first impressions of the Oppo R5 right here.

The camera is bulged out..this might make the slipping of the cell in pocket a bit disturbing

I love it thin as i am looking for a secondary phone. It has to be thin and light, and more than 3 hours screen light will be enough.